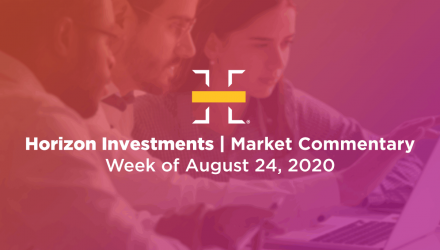 Market Closes at Record High, But Rally a Narrow One

The S&P 500 had another positive week last week — its fourth in a row and its longest streak since last December. The domestic equity market added 0.8% (SPX) to close Friday at an all-time high just below 3,400 points, and on Monday of this week opened above the psychologically significant 3400 mark. However, the U.S. market was an outlier last week, as overseas markets fell 0.6% (MXWDU), led by weakness in international developed markets, down 1.0% (MXEA). Emerging market equities closed the week 0.1% lower (MXEF) [Figure 1]. 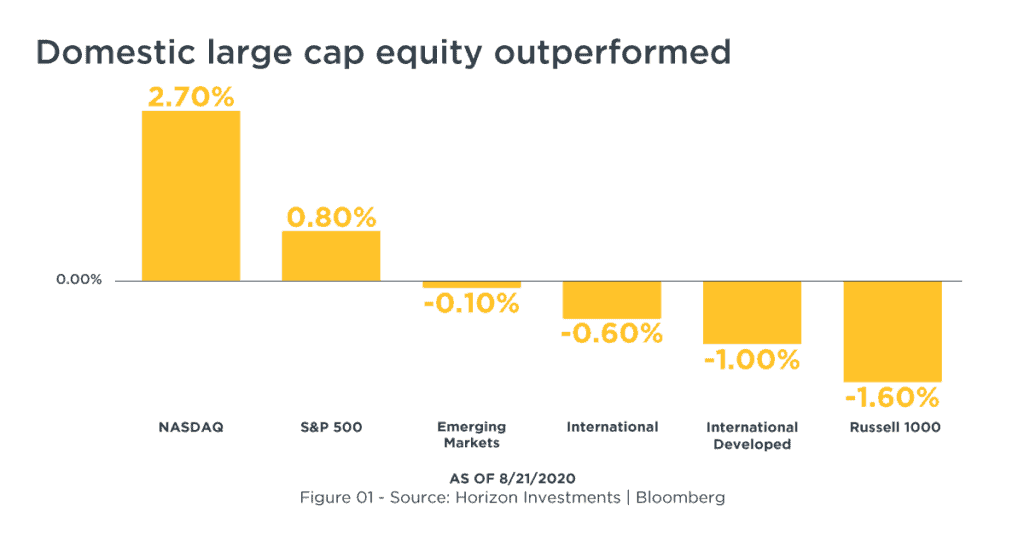 Despite the headline S&P 500 index’s all-time high, the internals show this to be a very narrow market rally led by the biggest tech names. This month, the average stock in the S&P 500 Equal Weighted Index (SPW) has lagged the headline index (SPX) by ~1.6% [Figure 2]. And last week’s price action was more of the same; Growth led value by ~3.8% and large caps outperformed small caps. Until the business model of mega cap tech cracks, or the economy returns to normal, it’s going to be hard to fight this trend. 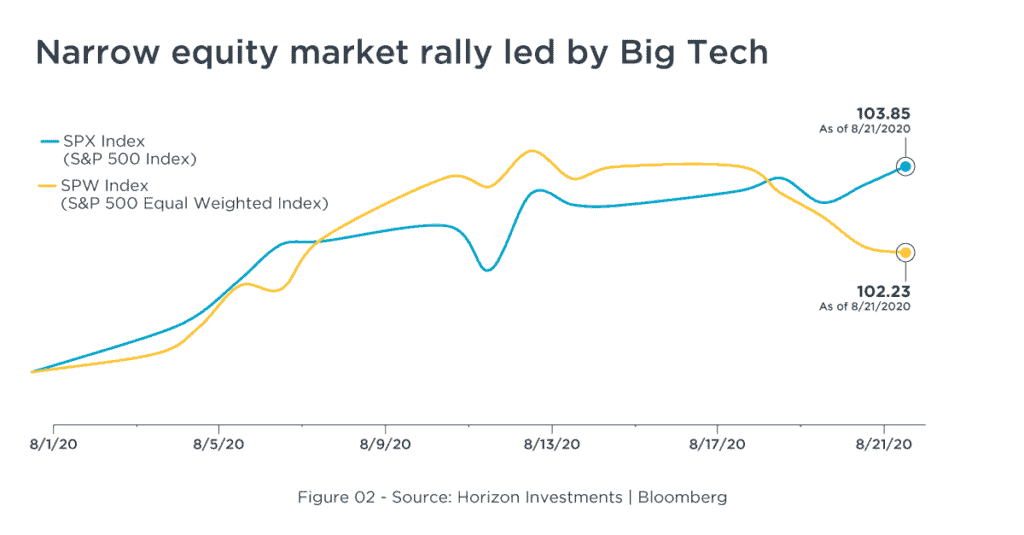 Could an upside surprise from Washington, D.C. spur optimism for unloved segments of the market? Congress left Washington two weeks ago with a post-Labor Day timeline for new stimulus, but rumblings about a potential “skinny deal” increased last week when Democrats  signaled they may be willing to accept a smaller deal. Additional unemployment insurance (UI) benefits would give a needed boost to the consumer. Still, we’re not inclined to chase the sugar-high value rally a stimulus deal would likely cause. We think only a true post-pandemic return to normal will bring about a sustainable value rotation.

The housing market has been a bright spot in this pandemic. Last week gave us another glimpse of the new working from home (WFH) dynamics interacting with record-low mortgage rates. Existing home sales rose almost 25% month-over-month (MoM) — another record increase in a record-breaking year. The total number of home sales was the highest since the heady days of late 2006, the tail end of the housing bubble [Figure 3]. 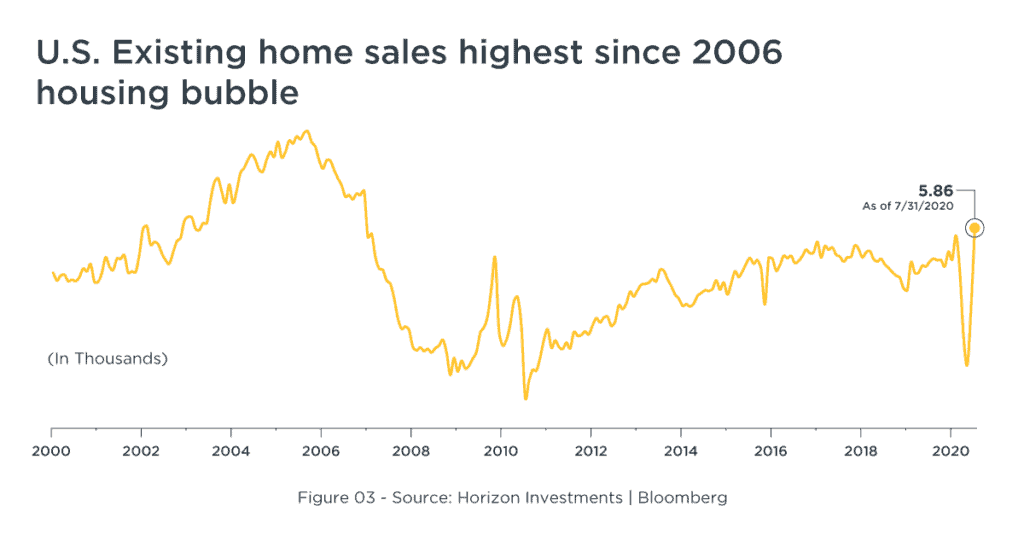 As jobless claims rise, is recovery stalling out?

It wasn’t all good news on the economic front. Initial jobless claims last week suddenly jumped back over the 1 million mark and there are signs the recovery may be stalling out. One thing on our radar is the state of the recovery in Europe, where COVID cases are rising again. The latest EU PMI surveys indicate the momentum of the economic recovery there is slowing.

No sign of weakness in demand for U.S. debt

The fall in rates came despite another large Treasury auction last week, this time at the 20-Year maturity. Flow data from the U.S. Treasury shows that foreigners are back to buying USTs. More broadly, despite the record deficits the U.S. is forecast to run, there are no signs that demand for U.S. debt is wavering.

The minutes from last week’s Federal Open Market Committee (FOMC) meeting provided dry kindling for the debate around what’s next for Federal Reserve policy. Judging by the volume of commentary on the minutes, there must not have been much else newsworthy last week. We think the academic arguments are largely just that and when it comes down to it, the Fed has one goal: to be as dovish as possible.

This week’s Economic Policy Symposium, often referred to as Jackson Hole Symposium (but to be held virtually this year), may offer some of the finer details around Fed policy. Fed Chairman Jerome Powell is due to speak on Thursday. And while he’ll have the market’s attention, we’ll also be parsing the words of the governors of the Bank of Canada and Bank of England. Both have made somewhat confusing comments around the potential for negative rates — and if they speak favorably about taking rates negative, this could pressure rates globally. While we don’t believe rates in the U.S. will go negative, if the idea catches fire elsewhere and other countries do go negative, that would only make U.S. bonds more attractive, putting downward pressure on rates across the board including here in the U.S.

The market definitely seems to be experiencing COVID fatigue. Even as France reported the most cases it has seen since mid-April, the market seems not to care. It just may be that increasing COVID infections won’t matter to the market until they do. In other words, the market will need some other excuse to care about the virus — for example, a significant drop in consumer confidence or spending or an even more significant increase in unemployment.

The fact that initial jobless claims jumped above 1 million last week is a sign the recovery is starting to taper off. That’s also reflected in high-frequency data, which shows economic activity essentially flatlining. To an extent, this is what investors expect, which is why large cap tech is still doing well and small caps can’t seem to keep a bid.

Wary of further signs of weakness in the EU recovery, we’ll be watching this week’s German IFO Business Climate Index and EZ Consumer Confidence Surveys (especially forward expectations) for potential cracks in confidence due to fears of a second COVID wave. Are consumers in Europe feeling less confident or more wary? Undeniably, Europe took more extreme measures and locked down harder during the first COVID wave and their GDP took a bigger hit as a result. If consumers there believe a second wave has started, given how extreme the first lockdown was, they may be more fearful now as COVID cases climb. We’re watching this closely as we think it’s something the market should be paying more attention to.

Another sharp rise in initial jobless claims here in the U.S. would almost certainly signal a stalling recovery and may be the impetus Congress needs to move faster on a stimulus deal. While the market is shrugging off COVID infections and flatlining activity for now, recent labor market trends do concern us.

There are still 13 million fewer people working now than in February. If employment can’t organically come back, either due to a second-wave shutdown or because consumers are fearful and unwilling to resume “normal” activity — and if there’s no further stimulus from the government — then spending power will be substantially lessened. This may be the thing that gets the market’s attention and gets politicians to care enough to negotiate a stimulus package of the size needed to support consumption. Without it, in that scenario, we don’t see how a return to prior consumption would be possible or how we would even sustain current levels.

The UMich Consumer Sentiment Index is expected to remain flat. The Expectations Index, which fell last month, will be the more closely watched one for signs consumers may be getting depressed given the slowdown in activity and what’s going on in D.C. with Congress’ failure to negotiate additional stimulus. While there is no sign that this is happening, if depression does set in, that could change everything.

With the Democratic Convention behind us, all eyes this week will be on the Republican National Convention (RNC). President Trump is planning to speak every night during the RNC, culminating with his acceptance speech on Thursday. Many are wondering whether President Trump will offer up any surprises during the Convention. Will Pence remain on the ticket? Could Trump publicly end the trade deal with China? Having already proved himself a volatile political character, Trump is bound to say something designed to grab attention and refocus the spotlight on him. It may or may not be related to the market, but the world will be watching.