You are at:Home»ETF Strategist Channel»Jobless Numbers Stay Near 50-year Low 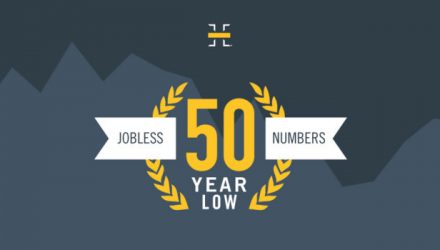 Stocks saw modest returns last week as earnings season kicked into high gear. The S&P 500 closed in on earlier records and was on course for the best four-month start to a year in more than three decades. Big banks dominated earnings news, where results were better than expected or not as bad as feared, depending on your point of view.

Economic data provided food for thought for both optimists and pessimists. U.S. manufacturing output was unchanged from February, while expectations had been for a rise of 0.1%. Total industrial production declined slightly. By contrast, homebuilder sentiment was up, hitting a six-month high as optimism started to return to the housing market. The trade deficit narrowed in February, suggesting that 1Q GDP may have been stronger than initially thought. (The current consensus is up 2.2%.)

Outside the U.S., the data was mixed as well. The Eurozone reported manufacturing data below expectations, while in Germany, the flash manufacturing index was up but less than anticipated. China, on the other hand, continued to show signs of turning things around, based on massive economic stimulus. Data from the region was mostly upbeat as industrial production, retail sales, and GDP all came in higher than expected.

This is a big week for earnings with about 40% of the S&P 500 set to report. While many companies are up against tough year-over-year comparisons, expectations are generally modest, leaving open the possibility of a surprise to the upside.

Positive economic surprises and better-than-expected earnings news were met with a muted response from global stock markets. The markets seem to be taking a pause following the historically strong start to the year. Small caps were particularly weak last week, which is usually a sign of shorter-term profit taking.

Overall, we continue to favor domestic growth and quality names along with direct Chinese exposure. We expect China to continue stimulating their economy, but understand that their stocks should likely be more volatile than other regions.

On the income side of things, bonds were generally flat for the week with all parts of the yield curve modestly higher for the month. Credit is still favored over Treasuries.

Volatility remained low with the CBOE Vix closing the week at 12. The one-year moving average stood at 16.

Since the December 24th bottom, global stocks are up 22%, the S&P 500 has returned 24% and the Invesco QQQ, which includes 100 of the largest domestic and international nonfinancial companies listed on the Nasdaq, is +31%.

Bonds had a down week with long-duration Treasuries declining -0.5% and high-yield and investment-grade debt down -0.2% and -0.4%, respectively. The 10-year Treasury ended the week yielding 2.56% Market participants continued to parse the economic data, on the outlook for a sustained reversal in global growth concerns before pushing riskier debt assets much higher.

The big number on the horizon is now Personal Consumption Expenditures (PCE), one of the Federal Reserve’s favorite inflation indicators, due out at the end of the month. With the Consumer Price Index (CPI) having been under 2% all year, higher inflation does not seem to be in the cards.