You are at:Home»ETF Strategist Channel»Is Your Strategy Active, Passive or a Little Bit of Both? 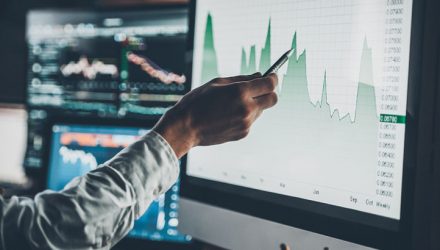 Is Your Strategy Active, Passive or a Little Bit of Both?

In recent years there has been a lot of discussion about passive versus active investing centered around the idea that passive is “in” and active on its way “out”. One of the drivers of this change is the rise of ETFs and strategies using ETFs instead of picking stocks.

The traditional definition of passive portfolio management is to “index”, where a manager simply buys whatever is in the index he or she uses as a benchmark, without trying to “add value” through security selection (stock picking). The idea behind passive indexing is that the market is sufficiently efficient that active security selection is unlikely to increase long-term investment returns once transaction costs and management fees have been taken into account. Research seems to back up this view; according to S&P, 92.2% of U.S. large-cap equity managers underperformed their benchmark during the 15 year period ending in 2016 (see below chart). 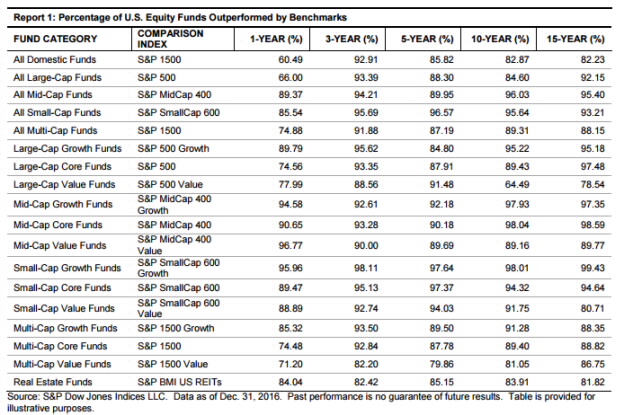 Active management seeks to outperform a benchmark by taking “active risk,” which is typically done by picking a selection of stocks in the index the manager believes has superior return prospects. This usually involves significant amounts of research on individual companies to gather knowledge that may not be fully reflected in the market valuation of a stock.

Lately, Smart Beta strategies have entered the discussion. Are they active or passive?

In its simplest form, Smart Beta is anything that is not a capitalization-weighted index strategy. The reason it is “smart” is because it seeks to avoid common drawbacks of a pure index strategy.  The reason it is called “beta” (as opposed to alpha) is because it doesn’t involve stock picking. Beta is, according to capital markets theory, the return of the whole market as opposed to individual stocks. Alpha is the added return on top of the broad market return that a skilled manager can add by picking the right securities.

People differ on where Smart Beta falls according to the definitions above; there is a temptation to define Smart Beta as passive because of the (typical) lack of individual security selection, but that ignores important differences between a pure passive strategy and Smart Beta.

A typical Smart Beta strategy will focus on certain attributes (factors) of the underlying securities that the manager thinks will lead to outperformance, such as Value or Momentum. Those securities that score highest on these attributes will receive the highest weighting in the portfolio, typically without doing any security specific research. In other words, the Smart Beta portfolio will still select stocks, but typically with the use of a systematic, rules-based approach.

This means that Smart Beta strategies are both active and passive; active in the sense that they differ from the underlying benchmark index and passive in that they do not pick individual securities based on security-specific research, but rather rely on what broad attributes these securities are associated with.

A couple of reasons why Smart Beta  strategies make sense over time include lower management fees (typically 10 to 50 bps) than traditional active strategies, as well as the fact that they fit well with research findings. For example, one of the few things efficient market theorist and Nobel Laureate Eugene Fama and behavioral finance expert and fellow Nobel Laureate Robert Shiller can agree on is the  existence of a “Value Effect”  in the stock market, which explains the propensity of value stocks to outperform the market over the long-term. In fact, Value is one of the so-called “Fama-French” factors, named after Professor Fama and his fellow researcher Kenneth French.  Both Value and Size were identified in their research on the drivers of historical stock performance, and were determined to be return factors separate from market beta.

So is Smart Beta the way forward for all investors from now on?

Not so fast – Smart Beta assumes that the market in individual securities is relatively efficient. If everyone was a Smart Beta or, even worse, passive investor, there could be massive mispricings in securities that would persist over time and ultimately undermine any advantage these strategies may have.

Think of the market as an ecosystem or food chain where every participant plays a role. Because most actors in the market are humans (some are trading robots) it is always in flux. The market is always impacted by humans and their imperfections and what we are seeing now with the rise of Smart Beta is a reaction to the traditional hegemony of active management, which hasn’t worked all that well in recent years. The pendulum may well swing too far in the direction of passive or Smart Beta strategies and that may well cause problems down the road. For the market to work we need investors with differing approaches, specialties and investing time horizons – if a consensus emerges that there is one superior strategy that works best for everyone we can be pretty sure it’s wrong…