You are at:Home»ETF Strategist Channel»Global Stocks Keep On Keeping On 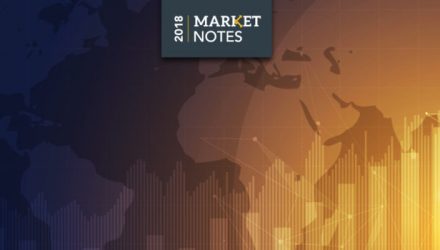 Global Stocks Keep On Keeping On

A mixed week for the U.S. economy. On the plus side:

Overseas, industrial production in both Germany and France was poorer than expected, and Japan’s GDP growth in the first quarter was weak. But PMI data in the UK exceeded expectations and Australian GDP beat expectations.

In the U.S. equity market, consumer discretionary stocks outperformed due in part to recent positive economic developments such as low unemployment and strong consumer confidence. Additionally, previous concerns about a “retail apocalypse” have abated as more companies have improved their offerings in ways that enable them to better compete with the likes of Amazon.

Related: Truths and Misperceptions About Trade and Globalization

Internationally, European markets were mixed. There was a notable weakness in Italy as investors remained uncomfortable with the country’s new government. However, Spain’s market performed well, as investors viewed the country’s pro-EU government and relatively stable economy positively. Argentina’s stock market got a boost after the country struck a $50 billion bailout deal with the International Monetary Fund. However, Brazil underperformed as its currency—the Brazilian real—fell significantly and as rumors of government graft and corruption resurfaced. Emerging market equities were flat overall.

Global stocks rallied last week, benefiting the equity portfolios. We have shifted the portfolios to an overweight position in U.S. stocks—in contrast to the first four months of 2018, when we had an overweight allocation to emerging markets and foreign equities.

The primary drivers for the repositioning are the strength of the U.S. dollar and the relative stability of the U.S. stock market.

Small-cap allocations, in particular, have been positive for the portfolios.