You are at:Home»ETF Strategist Channel»Global Stock Markets Perk Up as Investors Consider 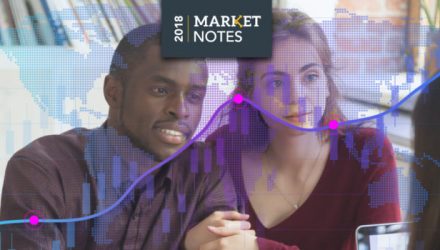 There was plenty of new economic data for investors to parse last week. Some of it, such as core CPI (consumer inflation) was in-line with expectations. Other data came in higher than expected—for example, PPI and core PPI (wholesale inflation). A slightly-below-estimate reading was seen in the University of Michigan consumer sentiment index for July.

Overseas economic results were varied. The UK’s month-over-month GDP growth (a new measurement of GDP that was just introduced) met expectations, but industrial and manufacturing production data for May were worse than expected. Poorer-than-anticipated results were also seen from Germany’s ZEW economic sentiment index for July and Japanese industrial production for July. Among emerging markets, Brazil reported retail sales growth that topped expectations and China saw better-than-predicted export growth over the past 12 months.

The U.S. equity markets shook off concerns about global politics and tariffs for the week, with the technology and industrials sectors outperforming. In contrast, the utility sector underperformed as investors were more comfortable with riskier segments of the market. Additionally, signs of rising inflation caused some investors to worry that interest rates could rise more sharply than expected—a negative development for utilities and telecommunication stocks.

Internationally, European markets were generally higher for the week, shaking off trade and tariffs worries. Auto industry shares in Europe appreciated meaningfully. Japan also benefited from the lessening of trade-related concerns (as well as from the yen falling to a six-month low). Emerging markets advanced due to strong results from Brazil, India and Asia-Pacific markets—the first time in more than a month that emerging markets equities were positive for a given calendar week.

Another strong week for global equity markets means stocks are now up over 2% so far this quarter. The trends from the second quarter have re-established themselves as we head toward earnings season: Large-cap growth and momentum stocks have rallied strongly in recent weeks, and the portfolios continue to hold positions in both. That said, our European holdings have dragged on performance of late.