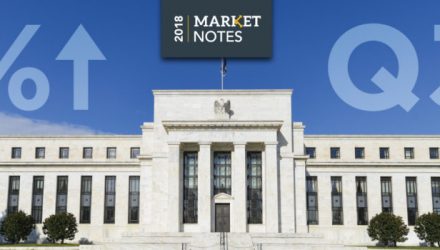 Fed Raises Rates as Third Quarter Comes to a Close

The Fed, as expected, raised a key short-term interest rate last week as the U.S. economy exhibited a mix of strength and weakness. The bright spots included:

Durable goods orders in August exceeded expectations (and increased at their fastest pace since February).
That said, a deeper dive reveals some areas of concern. The housing market continues to look shaky, for example. Although new home sales for August were in line with expectations, there were downward revisions made to past months’ figures—indicating that housing has been even weaker than previously reported. What’s more, pending home sales for August missed estimates. And a closer look at the durable goods results shows that, excluding transportation-related goods, the pace of orders was the worst in six months.

In Europe, economic news was also mixed. The UK’s GDP was weaker than expected—making the first half of 2018 the most lackluster economic growth seen in the UK since 2011. That said, German economic indicators (such as the business climate index) topped estimates, while French consumer spending was stronger than anticipated. For the eurozone as a whole, core inflation missed forecasts and remains stubbornly low.

U.S. equity market performance for the week was lackluster, with more sectors falling in value than rising. However, the week also marked the end of the third quarter—which saw U.S. equities posting their best quarterly returns in nearly five years. A new sector—communication services—outperformed, as did health care, as investors favored sustainable growth and defensive-oriented investments. Commodity-oriented areas of the market, such as materials and financials, came under pressure.

European stocks also came under pressure as investors focused on the drama and uncertainty around the Italian government’s 2019 budget. A profit warning from a large automobile-industry manufacturer—citing trade disputes as a key headwind—also hurt European shares. Meanwhile, Japanese equities cooled after a strong run, as investors weighed risks related to global trade tensions. Emerging markets were mixed, with Turkey outperforming but Argentina lagging.

Stocks hit a speed bump last week to close out a very strong quarter. Large-cap growth and other areas of equity market leadership during much of the quarter re-established that leadership last week after some recent weakness. We will be monitoring various returns to watch for potential shifts in leadership as the new quarter begins.