You are at:Home»ETF Strategist Channel»Fears of Trade War Put Pressure on Equities 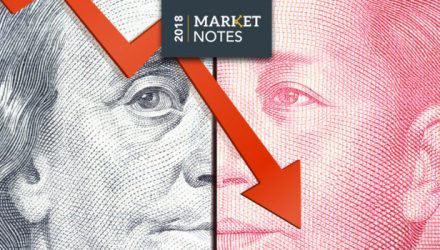 It was an tough week for global stocks, and the worst weekly performance for U.S equities since January, 2016. For the week, the S&P 500 fell nearly 6% while international equities were down nearly 4%.

Stocks sank after President Trump announced new tariffs on Chinese imports—fueling fears of an impending trade war that investors worry could hurt global economic growth. It’s possible that such fears may be overblown, however, as there are reports that the U.S. and China are already beginning the process of negotiating the situation.

Still, the news entirely overshadowed positive economic news last week, including a large monthly gain in durable goods orders that exceeded expectations. In addition, the number of people collecting unemployment benefits hit a 45-year low. Overseas, however, a measure of business sentiment in Germany fell to its lowest level in nearly a year.

The other major development last week was the decision by the Federal Reserve Board to raise a key short-term interest rate, noting that “the economic outlook has strengthened in recent months.” Statements from new Fed Chairman Powell following the rate hike suggest that, with him at the helm, the Fed is unlikely to raise rates continuously without signs that inflation is rising.

In the fixed-income markets, bonds were essentially flat for the week. The Fed rate hike likely somewhat capped the increase in bond prices that would normally would occur when risk assets such as stocks fall sharply.

As the markets tumbled last week, the technology sector performed the worst—down 7.9%, due largely to concerns that Facebook user data may have been used to influence political outcomes. Financials also underperformed, down 7.2%. In contrast, energy and utilities performed best (although both sectors were negative for the week).