You are at:Home»ETF Strategist Channel»Fair Trade vs Free Trade vs Trade War 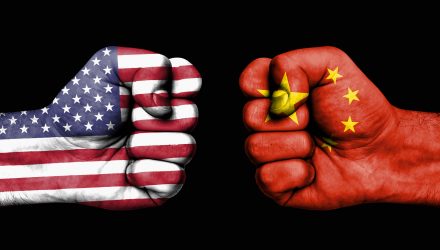 Can the US achieve fair trade without initiating a trade war?

For the last two weeks the possibility of steel and aluminum tariffs has created volatility and uncertainty. When you set the rhetoric and political posturing aside, we think the issue is a debate about Fair Trade. The US runs a trade deficit, and has done so for a long time. In simple terms, this means the US consumes more than it produces; which may seem unsustainable. However, the global supply chain and its connection to trade are now highly intertwined and complex. Consider a computer designed in the US and assembled in China. The value added by the US company, and the profits accruing to that US company, are far greater than the small margin paid to the assembler, yet it appears as an import for the US. Thus, trade deficits do not necessarily reflect corporate competitiveness or profitability.

Economic theory is clear: open trade leads to maximum efficiency in allocating resources, the resulting competition leads to lower prices for consumers.  In this utopian economic world, tariffs lead to suboptimal outcomes for all. However, the real world is not utopian, and countries like China don’t play by the same rules as others.

The ‘Fair Trade’ Rationale: It takes tough negotiation tactics to get to fair trade

The argument of the current Administration, is that the US, by being such a proponent of free trade over the last 30-40 years, has been taken advantage of by countries like Japan and more recently China. The administration seeks to establish fair trade and punish those who give government protection to industries (creating overcapacity), or who deny access to competitive US companies. In the 1990s, President Clinton and trade representative Mickey Cantor took an aggressive approach to achieving fair trade. The result was that the Japanese (and then the Germans) built a significant number of car plants in the US. Fair trade doesn’t necessarily mean we’ll get to a trade surplus, nor should we; but it’s a fight worth having and may mean a better deal for the US going forward. When President Trump tweets “trade wars are easy to win, what we think he means is that the US has a big stick as the world’s largest consumer, and that he intends to use it to get fairer trade. We expect this negotiation to be protracted and a big part of the 2018 mid-term election narrative as the President’s base has been growing increasingly disillusioned with trade. According to research from the Pew Research Center, since 2009 support for free trade agreements among republican voters have fallen from 55% to 35%, while support among democrats has grown from less than 50 to 65%.

The “free traders” such as President Trump’s former economic advisor Gary Cohen argue that, despite the imperfect nature of the global market for goods and services, open trade is critical for US companies. Furthermore, the US has thrived as global trade has expanded over the last few decades. Wall Street and a majority of US companies have benefitted and so the stock market is understandably nervous about tough negotiations escalating into a trade war.

In our 2018 outlook we called our pessimistic case: The rise of protectionism and the fall of QE. In the scenario we contemplate a break up of NAFTA and a trade war with China and envisage a down year for stocks. We assigned it a 30% probability and would not yet raise that. We are confident that the Trump Administration is aware of the dangers of a trade war, but clearly they are willing to take some risks to try and get Fair trade.

The Stock Market and Trade: The US is engaged in a ‘high stakes’ trade negotiation which will increase volatility

The S&P 500’s price action over the last two weeks both the fear of an escalating trade war, and the belief that the global economy is strong enough to survive a skirmish. The resignation of Gary Cohen, the President’s chief economic advisor, caused a sell off, but the market closed on a high on Friday after it became clear that Canada and Mexico would be excluded from the steel and aluminum tariffs while NAFTA is being re-negotiated. The people driving the debate in the administration; the President, Commerce Secretary Ross, White House Trade Advisor Navarro and Trade Representative Lighthizer are all committed believers that the US needs to be more assertive, and that if it does it will win concessions. While a major trade war would hurt the whole global economy, it hurts the surplus countries like China and Germany most urgently but there is also a potential cost to the US. With our escalating budget deficits the US is going to have to borrow an increasing amount from our trading partners. We believe a trade war will increase the cost of that borrowing to the US.

In February we reaffirmed our strategic commitment to stocks over bonds and our balanced portfolios reflect that view. So long as we give the higher probability to continued global economic and earnings growth, and provided our tactical indicators remain positive (as they currently are), we intend to remain overweight stocks relative to our benchmarks.

Actual trade wars are neither ‘good’ nor ‘easy to win’; however, we do not believe the globe is headed for one. Rather, we view the language from the Trump Administration as simply the opening salvo to a protracted negotiation to try and gain more fair trade for the US versus players like China. The US has specifically asked China for a plan to reduce its surplus by $100 billion. Ironically, for those (like us) who are nervous of populism taking over, these preemptive moves may actually decrease the likelihood that populism spreads in the future.

THE WEEKLY CHART: THE PRIMARY TREND OF GLOBAL STOCKS IS UP 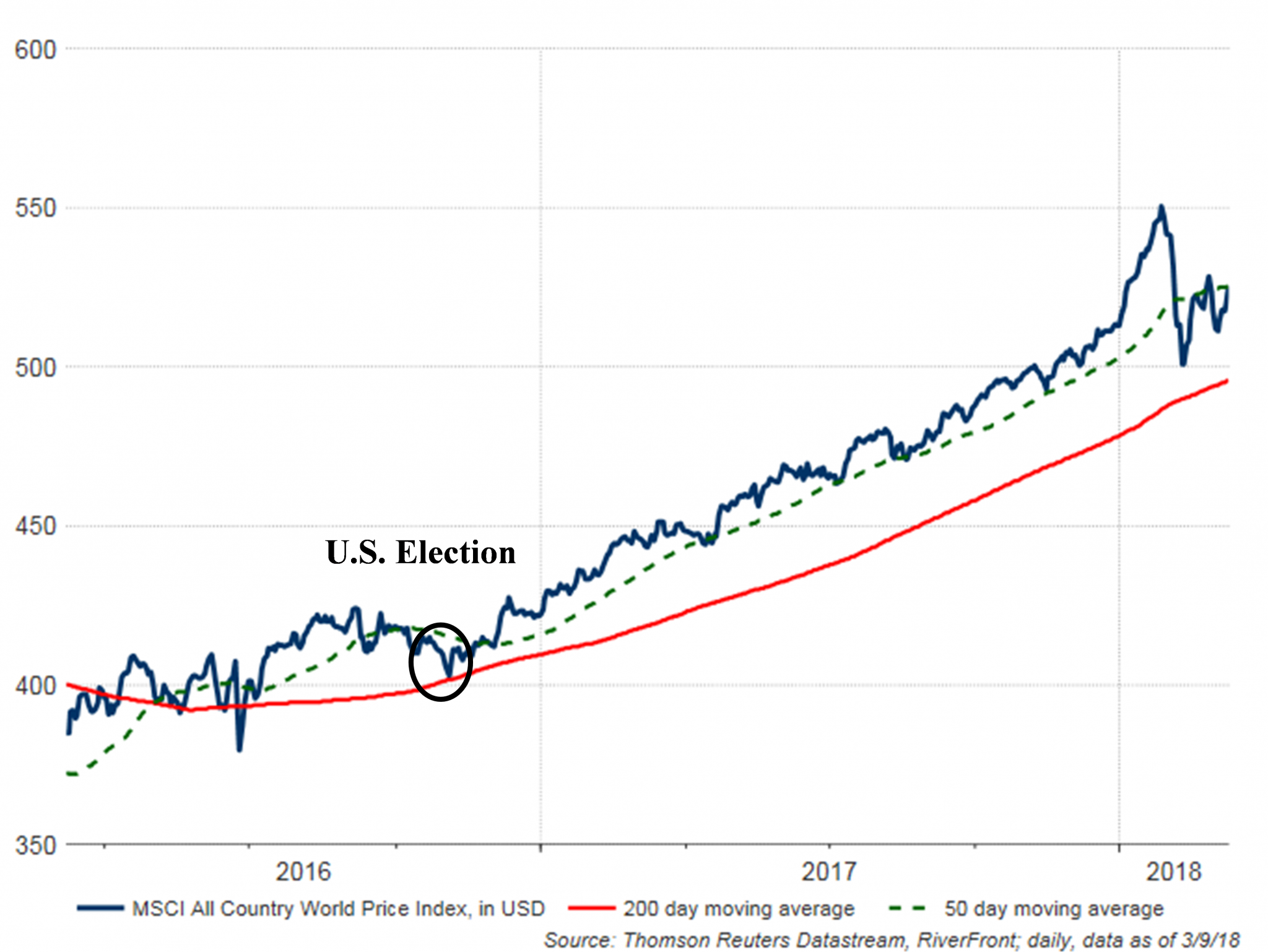 Source: Thomson Reuters Datastream, RiverFront. Shown for illustrative purposes only. Past performance is no guarantee of future results.

The chart above shows the MSCI All Country World index over the last two years. The index bottomed in 2016 and accelerated following the US presidential election, as earnings accelerated and overseas currencies strengthened. The 200-day moving average (the ‘primary trend’ in our view) remains up and this index is consolidating between it and the 50-day shown above. We believe the ultimate breakout will be to the upside.