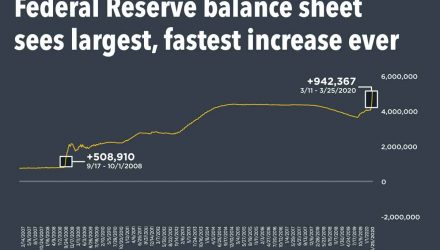 Equity market volatility continues as investors, who are now mostly working from home, grapple with the evolution of COVID-19 and government stimulus. After touching its lowest reading since December 2016, on 3/23/2020 the S&P 500 (SPX) rallied aggressively and closed the week up 10.3%. International developed equities (MXEA) added almost 1% to the S&P’s performance, while emerging market equities (MXEF) lagged amidst local currency weakness versus the U.S. dollar (USD) [Figure 1]. 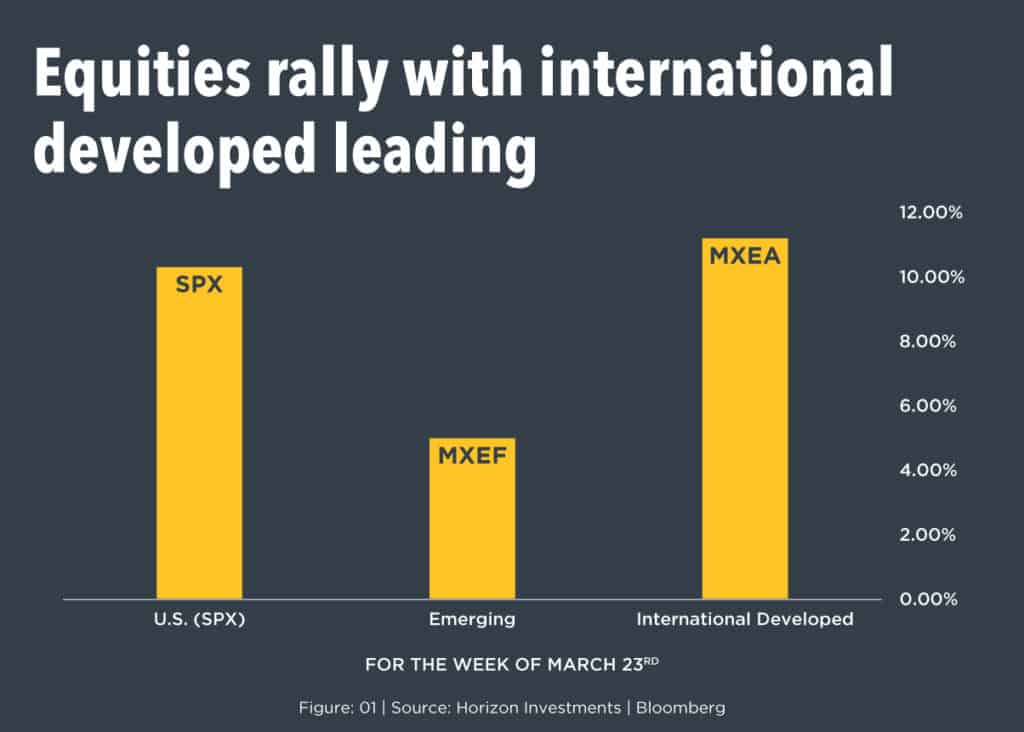 Value beat growth and small caps beat large in a reversal of recent market action — likely an indication of short covering and bottom fishing in some names, not a new trend.

Despite the gyrations this past week, realized volatility is actually falling. While an encouraging sign, it remains incredibly elevated, with the CBOE Volatility Index (VIX) in the mid 60s compared with about 14 at the end of 2019.  Two-week realized volatility in the S&P 500, after peaking around 130, has declined to the mid 80s. You’re forgiven for feeling that the market is still volatile — this measure began the year around 7.0.

The volatility we’re seeing is less a reflection of risk than of uncertainty. What’s the difference? Risk is measurable (it has a normal statistical distribution). Uncertainty isn’t. For example, one can reasonably understand the risk of known unknowns. We know how investors using volatility to size positions might behave or how oil shocks could potentially impact markets. But COVID-19 is an unknown unknown. We don’t know how the virus might change or evolve, what the health and economic impacts will be, or for how long we’ll have to contend with it. That makes it incredibly challenging to price equities right now. Because of this, we expect volatility to continue for some time, both to the upside and the downside.

On the other hand, fixed income market function is improving, showing the efficacy of the extraordinary measures announced by the Fed and other central banks over the past few weeks. Bazooka may be an understatement, as the Fed has purchased $631 billion in U.S. Treasuries since resuming Quantitative Easing (QE) two weeks ago. It plans on purchasing a smaller amount this week than last week, reflecting growing confidence that it has the U.S. bond market more under control.

Yields decline across the curve

Another sign of proper market functioning? Yields declined across the curve last week, with the 2-year Treasury falling 7 basis points (bps) to 0.25% and the 10-year falling 17 bps to 0.68% [Figure 2]. While these seem quite low, it makes sense given the Fed’s commitment to keeping rates lower for longer in order to support growth.  And because of how broken things things were, you can see that when the Fed first announced QE before the open on March 16th, bond yields initially went higher before eventually declining [Figure 2]. 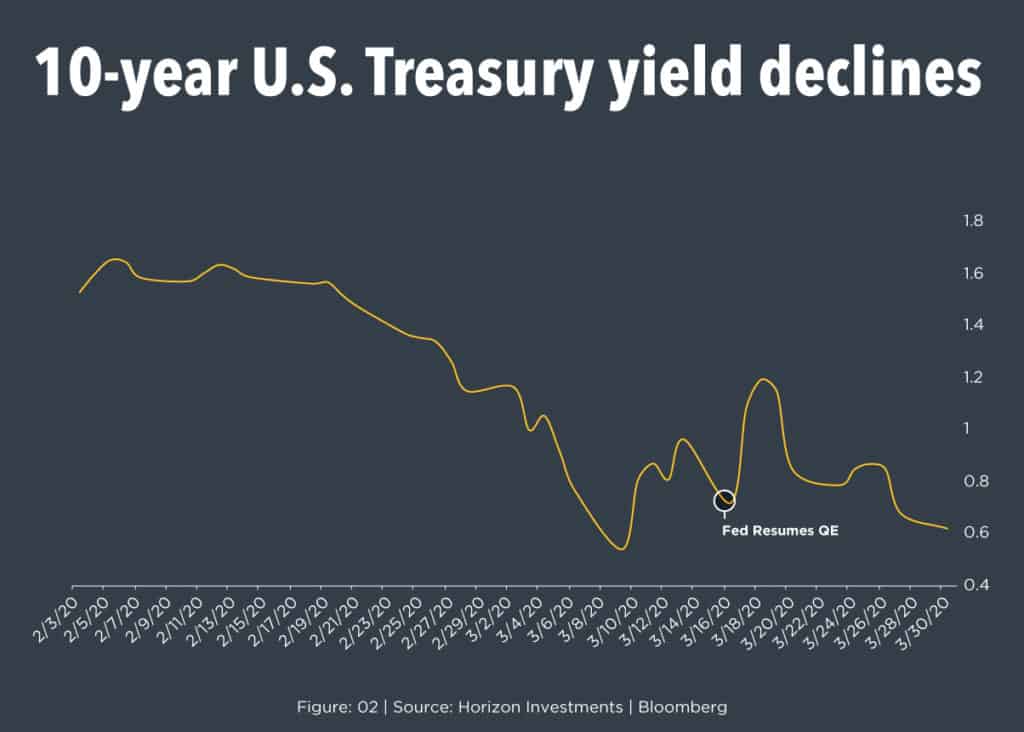 Credit markets improved last week as well, partly due to better equity sentiment, but also because of the upcoming Fed programs and the stimulus bill.  Institutional-Grade (IG) credit spreads fell 40 bps while High-Yield (HY) fell 227. IG issuance has been huge, and the HY market saw an issuance Monday for YUM! Brands.

Funding spreads, both in the U.S. and cross-border, improved last week. Importantly, the USD weakened as well. While difficult to discern how much is quarter-end related, we’re encouraged that the plumbing of the financial system appears to be working more efficiently than it was a few weeks ago.

Last week, Congress passed, and the President signed, a truly massive fiscal stimulus package — the largest in history — worth about $2.5 trillion. There’s something in it for everyone, including direct stimulus checks, loans and grants for businesses large and small, and about $450 billion capital earmarked for the Fed to carry out the alphabet soup of programs it has announced.

All told, the Fed’s recent actions have increased its balance sheet by $942 billion in just the past two weeks, the fastest and largest-ever increase [Figure 3]. The Fed has now done everything it did in 2008 and more — but in just two weeks rather than over months. If the Fed also takes the capital Congress has allocated and levers it 10:1, as has been suggested, that’s a potential $10 trillion balance sheet! 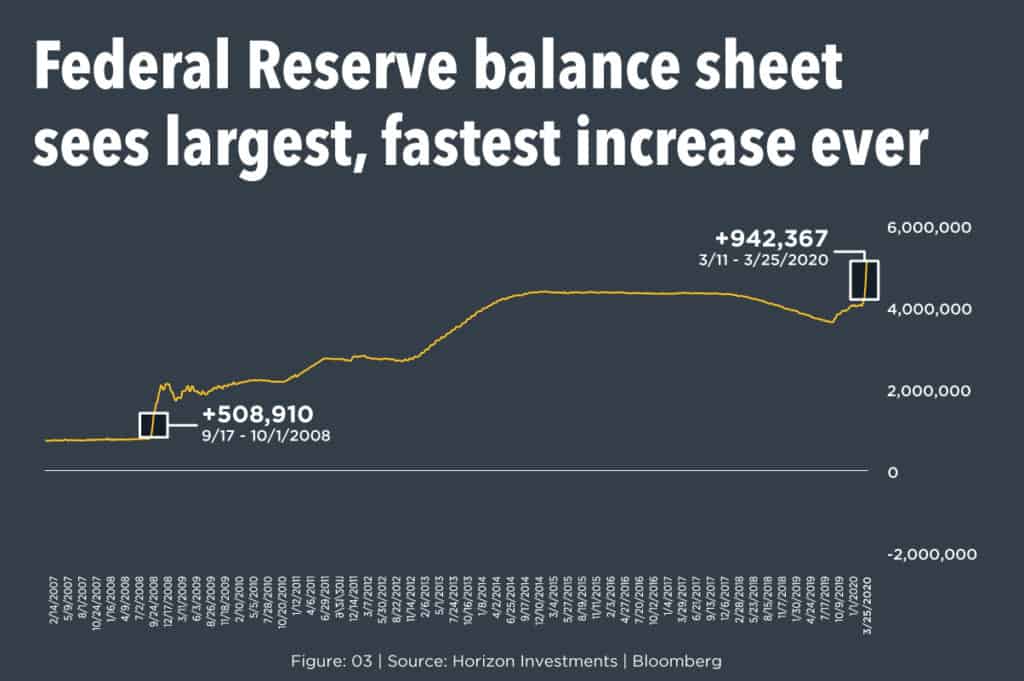 At this point, we don’t think it sensational to say the entire country is on war footing now. When you can no longer price U.S. Treasuries, the biggest and most liquid market in the world, massive intervention is clearly needed. Thanks to Fed actions, we now appear to be in a more stable place from which to move forward.

Other countries, developed and emerging alike, are also stimulating their economies. In overall size and as a percentage of GDP, however, the U.S. remains the leader.

Last week also gave us our first look at the impact that measures to slow the virus’ spread have had on the U.S. economy — jobless claims were released Thursday.  A record 3.3 million new claims were filed, which means almost 1.6% of the working age population is now newly unemployed [Figure 4]. This week’s number is likely to be even higher as debate over the economic impact of public health measures rages on. 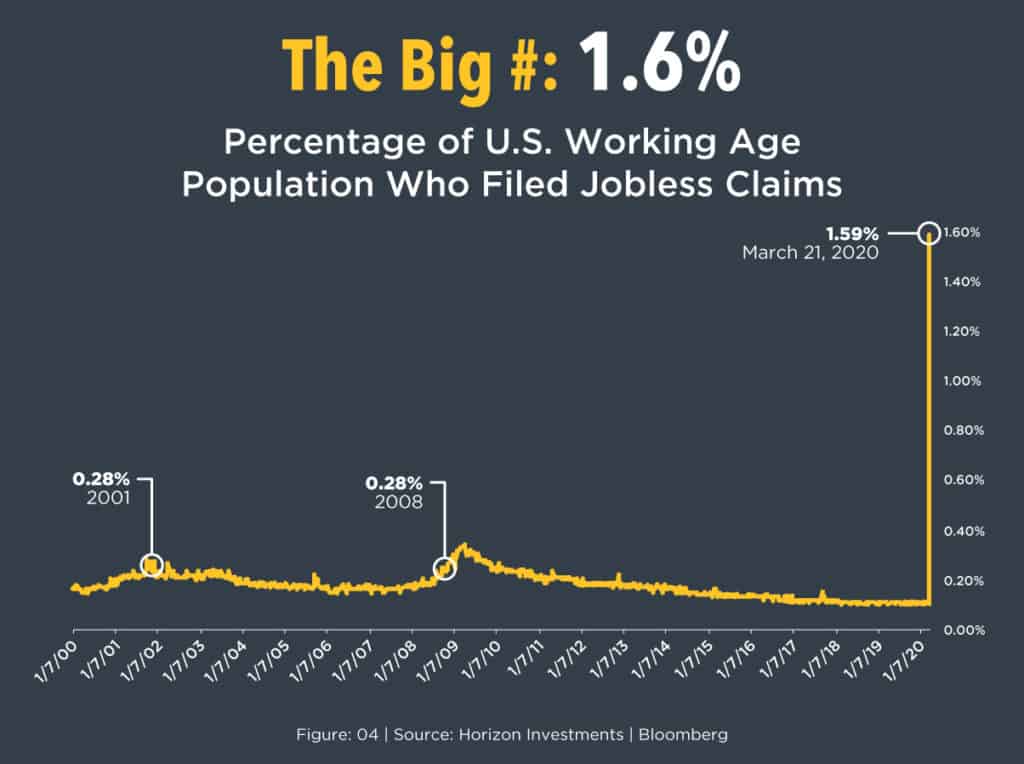 What to watch ahead

The big challenge right now is the uncertainty of the virus’ impact on the U.S. and global economies. Right now investors are trying to price stocks inside that uncertainty. Economists and global health think tanks, including the American Enterprise Institute, have begun to create roadmaps for what that road to reopening the economy might look like. We believe investors are going to start pricing in that long-term view, though at a discount to account for the uncertainty. At some point, we do know that life is going to resume and things will return to some semblance of normal.

We’ll be watching manufacturing data globally this week for potential signs of improvement in China and to assess what impact has been felt elsewhere.

The whisper number for this week is approximately 5 million new claims.

Normally the biggest data release of the month, the monthly jobs report for March will only cover the period through March 12th. Given the incredible acceleration of the virus and fiscal events, the report will be too backward looking to matter much.