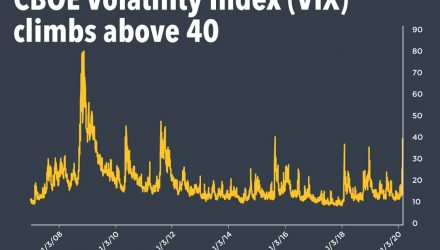 What a week! Equities had a truly awful time, with global stocks ending down -10.4% (MXWD) in incredibly whippy trading. Regionally, the U.S. fared the worst, with the S&P 500 (SPX) seeing its biggest weekly decline (-11.4%) since the 2008 Global Financial Crisis. Emerging markets led by about 4% (MXEF -7.2%) and international developed markets ended in between the two (MXEA -9.6%). 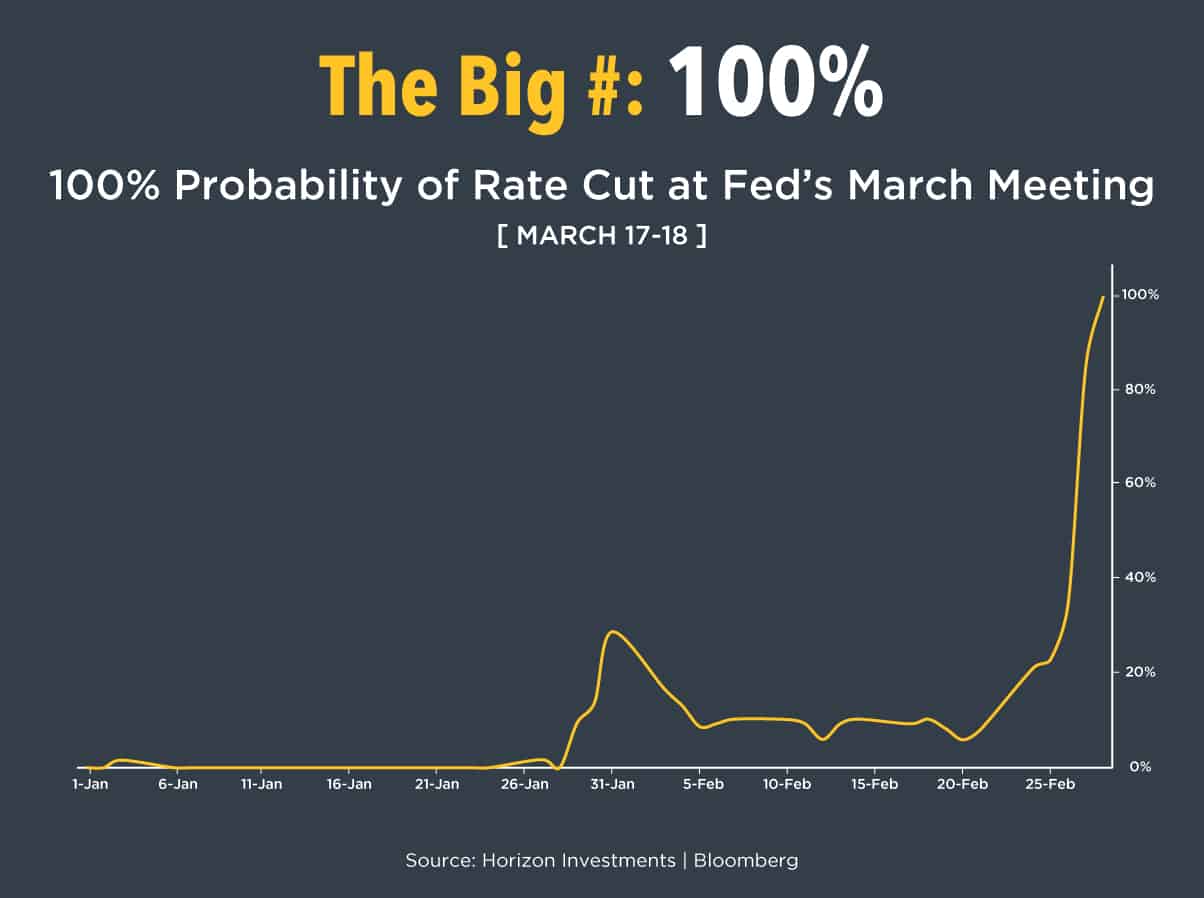 Last week, there was simply nowhere to hide from the selling in the U.S. markets. All sectors were down double digits except for Communication Services. Growth led value and large-cap led small-cap, but price action was very random intraweek, indicating extremely illiquid conditions.

The CBOE Volatility Index (VIX) closed above 40 on Friday for only the sixth time since 2008 and was up 135% on the week. Short-dated options are more expensive than they’ve been in any of the post-2009 market shocks.

By the end of the week, the market was the story. Novel coronavirus concerns and Bernie Sanders’ rise in the Democratic nominations process fueled selling, but illiquidity and offsides positioning morphed into the real news: “Dow down 3600 for the week!” Selling fed on itself as fear seemed to take over.

Rates fell across the globe, with U.S. Treasuries leading the way. The 10-year and 30-year debt closed at record low yields on Friday. Despite the low rates, bonds showed they can provide portfolio protection as the S&P U.S. Treasury Bond 20+ Year Index price was up 4.9% last week. Outside the U.S., the yield plunge was not as intense, and benchmark rates in Germany, Switzerland, and Japan remain off the lows seen last summer.

Credit spreads gapped wider (Investment Grade +20, High Yield +75, Emerging Markets +59), and more importantly, there was no issuance in the U.S. last week. This inability to issue debt is very concerning to the Fed.

No surprise, given the market’s movement, that expectations of Fed easing have rocketed higher. Markets are pricing in 3.5 cuts by the end of the year, up from just 2 last week and less than 1 to begin 2020. Fed Chairman Jerome Powell issued a statement late Friday indicating that the Fed will “act as appropriate to support the economy,” essentially a thinly veiled indicator for monetary easing. Because the kind of volatility we’ve seen, coupled with closed credit markets, can make a growth slowdown worse, we do expect the Fed to act — and potentially as early as this week. According to the current market implied rates in Fed Funds futures, as of Friday, odds of a rate cut at the March meeting were 100%. 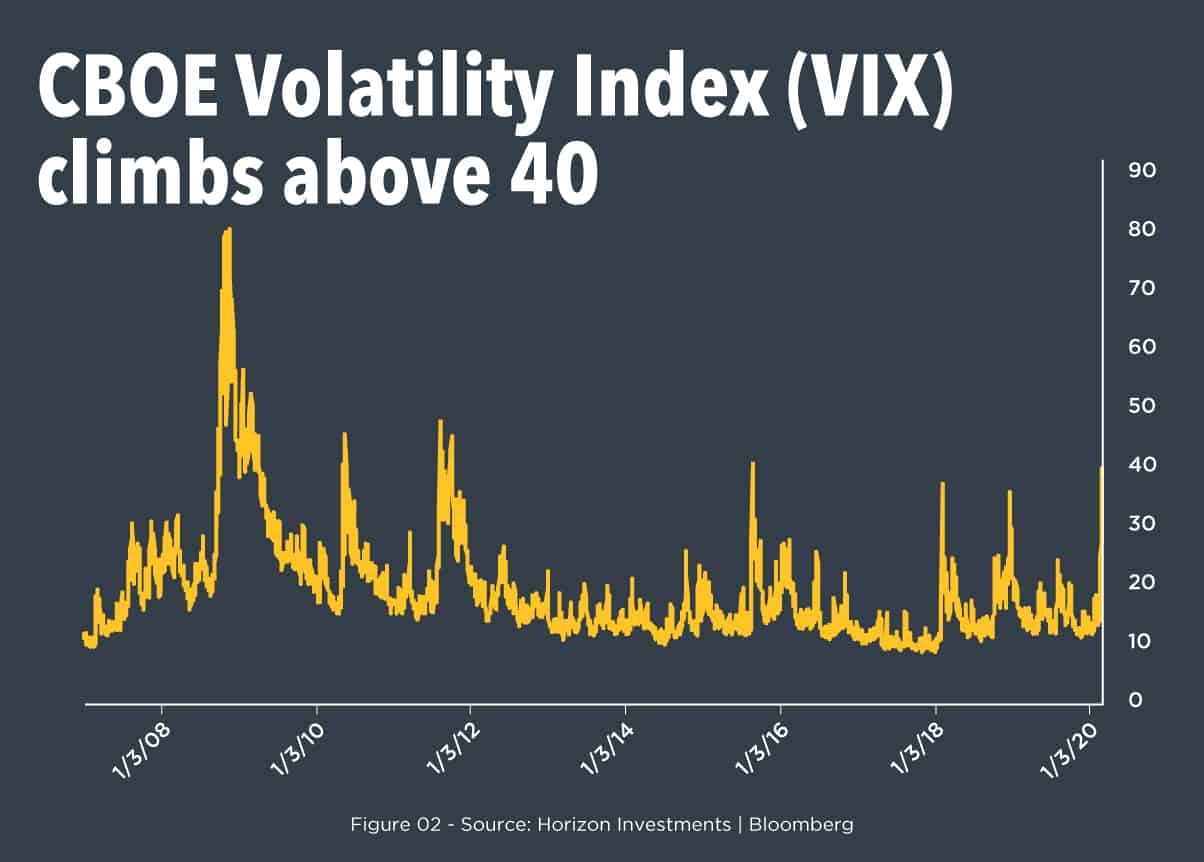 Coordinated action with other Central Banks would be an upside surprise. We’ll be watching to see if that happens. The U.S. dollar was also lower against its G10 peers, another indication that the market expects more action from the Fed than it does from other central banks.

Despite travel restrictions, signs of hope in China?

It’s been hard to get a handle on what investors are expecting with the virus, but clearly a growth slowdown is in the cards as more and more companies curtail travel. China’s Purchasing Managers’ Index (PMI) declined to a new record low over the weekend, but their efforts appear to be working as new Chinese cases of COVID-19 flatline and Starbucks starts to reopen stores.

What to watch ahead: COVID-19, Super Tuesday and central bank actions

In the week ahead, we’ll be keeping close watch on whether there is coordinated global central bank action. We’ll also be watching rates of infection of the novel coronavirus outside of China, especially in the U.S., and how well containment measures appear to be working.

On the U.S. Presidential election front, Bernie Sanders’ apparent rise to nomination was dealt a blow this weekend in South Carolina, showing that Joe Biden isn’t done yet. This week’s Super Tuesday, where approximately 35% of the total delegates are awarded, will be crucial to the Democratic race. Friday also brings the U.S. jobs report, and PMIs will be reported for major economies, but data just isn’t the main focus right now.