You are at:Home»ETF Strategist Channel»Economic Signals are Strong as Q2 Ends 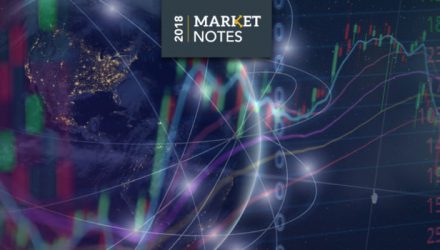 The second quarter of 2018 ended with economic signals both strong—new home sales in May were well ahead of forecasted estimates—and tepid: GDP for the first quarter was revised lower for the second time, to just 2.0%, on downward revisions to spending on services and decreases to inventory investment.

U.S. equity investors generally maintained their preference for defensive sectors last week, with the utilities and consumer staples sectors outperforming. Among cyclical sectors, energy was the bright spot. However, most sectors were negative—with the once red-hot tech sector suffering the worst on reports that the Trump administration might restrict U.S. technology companies’ exports to China. Talk from the White House about possibly banning Chinese companies from acquiring U.S.-domiciled tech firms further hurt the sector.

Overseas, European stocks were weak—especially in Germany, where concerns about Trump’s tariffs hitting the auto industry weighed on the market. In contrast, larger emerging markets in Latin America such as Mexico outperformed as political fears subsided.

In the fixed-income markets, longer-duration U.S. government bonds underperformed comparable European bonds—although, on the plus side, both were up for the week. Emerging markets debt underperformed as currencies in these markets continued to weaken.

Stocks struggled for a second consecutive week as markets worried about various “headline risks” coming from the White House. A risk-off tone prompted many investors to take profits and rotate assets into areas of the markets that had been performing relatively poorly.

We have seen this type of rotation in the past, and it tends to be short-lived. Indeed, the final days of the week showed signs of the rotation coming to an end, as previous market-leading sectors once again asserted themselves. Given the large dispersion between asset class returns, we would assume that various risk-based strategies (such as risk-parity and risk-target strategies) had to rebalance near quarter-end.

Domestic stocks have been more stable than foreign equities for the past few months, and we continue to evaluate our overall exposure to international markets—Europe, in particular. We made maintained out current equity allocation, however, and ended the quarter with maximum equity exposure and an overweight to U.S. stocks and preference for growth stocks. Small-caps remain at a benchmark weight.