You are at:Home»ETF Strategist Channel»The Current State of the U.S. Economy 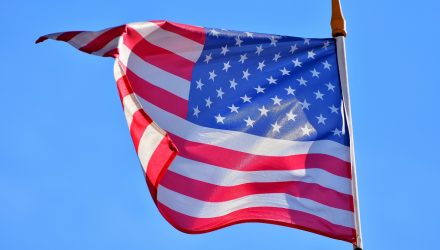 The Current State of the U.S. Economy

All this strong economic date was wrapped into the Q1 GDP report which showed the U.S. economy expanding at a +2.3% SAAR, beating expectations for a +2.0% rise. The typically weak first quarter report is expected to be the low water mark for the year as fiscal stimulus from the 2017 Tax Reform Act kicks in during Q2 and Q3.

Current estimates have GDP hitting 3.5% to 4.0% during the latter half of 2018, with pick-ups in capital expenditures and wage increases taking hold. Despite the optimism for the balance of the year, potential headwinds include the rising US Dollar, Federal Reserve interest rate hikes and the potential for tariffs and other trade disrupting measures from Washington.

The Federal Reserve hiked the Fed Funds rate 25 bps in March and suggested another two hikes were in the offing for the balance of the year. This despite an inflation rate just starting to hit its target measure of 2.0% on a semi-consistent basis. The PCE Deflator for March was unchanged while the Core PCE measure ticked up by 2/10ths of a percent, marking a +1.9% YoY rise. As mentioned above, the rise in both CPI and PPI remains manageable at this point and doesn’t necessarily warrant an aggressive Fed.

April marked the 9th year of the current economic expansion, the second longest on record. Given the difficulty in
forecasting recessions (we’ll leave that to the palm readers and fortune tellers) and the delayed stimulus we anticipate arising from the tax reform bill, we’re reluctant to call the end. Inflationary pressures are modest, despite rising labor shortages, and productivity certainly has room to improve. The only thing we see as a risk at this point is an overly aggressive Fed and the headwinds that higher interest rates may create. Stay tuned.