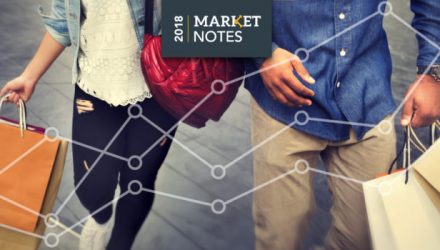 U.S. economic data for the week was mostly robust. The Conference Board’s Consumer Confidence indicator exceeded expectations, coming in at its highest reading since 2000, while GDP growth for the second quarter was revised higher than initially reported. That said, the housing market continued to show some cracks:

The S&P CoreLogic Case-Shiller National Home Price index (which measures the change in the selling price of single-family homes in 20 metropolitan areas) grew at a slower pace than expected.

Additionally, the month-over-month change in pending home sales was both negative and below estimates.

In Europe, German current and future business expectation measures exceeded forecasts; however, German consumers were less sanguine about their current and future prospects. Meanwhile, France saw consumer spending and GDP results for the second quarter that were in line with expectations. And Italian unemployment was better than anticipated—the lowest it’s been since the summer of 2012—helping to keep overall EU unemployment at its lowest level in a decade.

In the U.S. equity market, the technology and consumer discretionary sectors outperformed. Tech shares benefited from analyst upgrades and a general shift to a positive sentiment about the sector, while robust retail earnings reports supported consumer discretionary stocks. Defensive sectors such as telecommunications and utilities underperformed as interest rates rose and as investors continued to favor more growth and/or cyclical-oriented sectors.

After a positive start, European shares endured downward pressure later in the week as concerns over emerging markets risks, trade war worries and Italy’s financial health returned to the top of investors’ minds. President Trump resumed his aggressive stance towards the EU, which only added to risk aversion in Europe. Japanese shares were the standout performers for the week, as market participants turned more “risk-on” after hopes for a U.S.-Mexico trade agreement improved and as the country prepared for presidential elections.

Emerging market equities were hit hard as weakness in Argentina and Turkey sparked contagion fears, while the elevated trade war rhetoric only exacerbated the perceived emerging markets risks. Despite that, Taiwan and Russia markets outperformed their peers.