You are at:Home»ETF Strategist Channel»Central Banks Weigh In on Global Economy 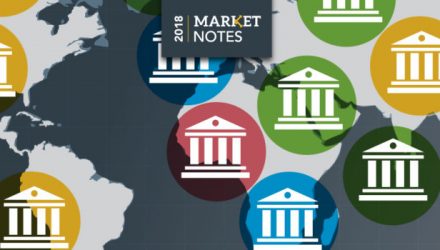 All eyes were on global central banks and their monetary policy decisions last week. In the U.S., the Federal Reserve Board opted to raise a key short-term interest rate for the second time this year. Fed Chairman Powell’s comments after the decision were more hawkish than expected—prompting some investors to predict that, going forward, the Fed might raise rates more aggressively than was expected prior to the Fed’s meeting.

Overseas, the European Central Bank diverged from the Fed by taking a more dovish posture with its monetary policy. Although the ECB said it would end its quantitative easing bond-buying program, it also stated that it planned to maintain interest rates at their current levels though at least the summer of 2019. (These divergent actions caused the dollar to strengthen relative to the Euro.) Finally, the Bank of Japan chose to keep its quantitative easing program in place, while also lowering its inflation expectation range.

Meanwhile, economic data in the U.S. was generally positive. Month-over-month results for both the Producer Price Index and the core Consumer Price Index, along with retail sales figures, came in better than expected.

Utilities outperformed in the U.S. equity market as activist investors became more involved in the sector and as interest rates declined slightly for the week. In contrast, energy stocks suffered due to falling oil prices brought on by talk from OPEC about potentially increasing oil production.

In emerging markets, China opted to keep some of its key interest rates steady—causing global investors to wonder if China’s economy is slowing. Weaker-than-expected retail sales and industrial output also weighed on China last week. Meanwhile Latin America continues to be under pressure, with currencies such as the Mexican peso hitting a low not seen since early 2017. One reason: The leading presidential populist candidate is viewed as a risk to Mexico’s fiscal status. That said, in Argentina there is some hope that MSCI will upgrade the country’s emerging markets status. That would bode well for their equity market and potentially quell at least some of the fear in the region.