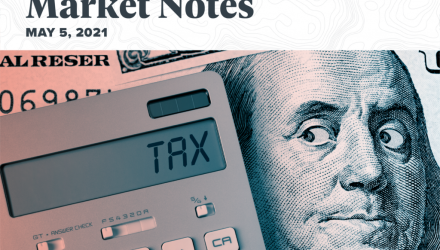 Capital gains tax rates and stock market returns have a lot less in common than you may believe. Their relationship is in the spotlight with the Biden Administration proposing to increase the top capital gains rate by almost 20% to 43.4% for the wealthiest part of the population. While the stunning proposal may just be an opening salvo for negotiations with Congress, if it is enacted it would be the highest tax rate on capital gains in the history of the United States.

The potential for an increase in capital gains tax rates is not a good reason for goals-based investors with long-term financial targets to abandon the potential wealth compounding feature of equity markets.

Surprised by the magnitude of the change and how quickly the administration is moving, investors are worried that the tax push will upset the recent strength in the stock market.

Scattershot scatterplot
Since equity investors are in the business of discounting the future, we looked at whether there was a relationship in the year before the capital gains tax rate changed.

Intuitively, one would assume investors would act ahead of a tax increase to lock in a higher after-tax value of their investments, likely redeploying that capital the following year back into stocks. On the flipside, investors would likely hold off on selling their shares ahead of a decrease in capital gains tax rate, to take advantage of lower taxes.

No matter how we looked at the data, we found essentially no relationship. In the nearby scatter plot chart for the year when the tax rate changed, the correlation value of stocks and the change in the tax rate – shown as the R2 – is close to zero. In statistical terms, a zero reading means equity returns and changes in the capital gains tax rate are strangers; the movement in one has no explanatory value for the movement of the other.

Macro trumps micro
While taxes are a very important consideration for investors, in any given year the macro conditions likely overwhelm any investor behavior spurred by changes in the capital gains tax.

For example, in 1987 and 2013 when there were substantial increases in the top capital gains tax rate, the S&P 500 scored multiple record highs in both of those years, and posted positive annual gains – even despite the October 1987 crash (which was related to portfolio insurance, computer-driven trading and a weaker dollar, rather than tax rates).1

Valuations for equities were reasonable on a trailing price-to-earnings basis at the start of those years, earnings grew by year-end and economic growth was positive. Federal Reserve policy was stimulative going into 1987, having cut rates by 175 basis points in 1986 as inflation retreated. In 2013, the Fed kept rates at essentially zero and added economic stimulus through the buying of Treasury bonds amid a global growth scare. The favorable macro backdrop is similar to today, which could blunt the impact of the proposed tax change on the stock market.

The administration’s tax proposals go well beyond capital gains, of course. And some people are worried the government may be taking too big of a bite out of the economy.

Yet what happens is that companies and individuals (and their accountants) generally attempt to manage their income and deductions to reduce their tax bill when the laws change. The result is that government tax receipts have remained constant at around 15% to 20% of GDP over the last 76 years, indicating that government stimulus, which accelerates economic growth, offsets the changes in the tax code.

Our historical analysis indicates the impact of capital gains taxes on equity returns is barely there. Indeed, that seems to still hold true. After selling off on news reports about the details of Biden’s tax plan, the S&P 500 quickly rebounded to a record high.

Stocks for the long-term
For goals-based investors, the impact of taxes should be considered. But we believe the potential for an increase in capital gains tax rates is not a good reason for investors with long-term goals to abandon the potential wealth compounding feature of equity markets.

At Horizon, we are focusing more on the transition from a government-spending led economy to one driven by the consumer, as well as the outlook for the Federal Reserve to raise interest rates, a key determinant of asset valuations. Both of those factors are currently supportive of equity markets and we think there’s little need for most investors to be concerned about a change in the capital gains tax rate.

Get a print version of this commentary.