You are at:Home»ETF Strategist Channel»Bond Market Fireworks Force a Stumble in Stocks 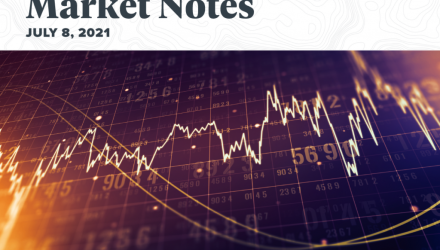 The July 4th holiday’s fireworks extended into the work week on Wall Street. The 10-year Treasury note rallied further and faster than many had thought possible, pushing the yield down to as low as 1.25% during Thursday’s trading. It was at 1.77% at the end of March amid concerns about inflation.

The 10-day drop in the yield on the 10-year Treasury note is 21 basis points; that’s the biggest so far this year and eclipses a January rally that occurred during a winter surge in Covid cases.

There’s no one, clear catalyst to point to for the rapid drop in yields. And that uncertainty spilled over into stocks as perplexed traders decided to take a more conservative stance until more is known. The S&P 500 fell at the opening bell, but quickly recouped part of the loss.

Such large moves in bonds in a short period of time can sometimes take on a momentum of their own as traders who were hoping for a reflation trade are forced to get out of the way. That can produce exaggerated moves as traders manage their risk. At this point, no one can rule out more volatility and big headlines as investors re-position in the wake of the bond market rally.

Any number of reasons have been cited for the action. One firm, Deutsche Bank, conducted a poll of 300 investors and traders and listed the drivers from most to least important, reports Bloomberg News.

Demand for Treasuries has been strong despite the record size of recent auctions. Foreigners are likely attracted to the high yields on offer in the U.S. compared to their home market. For example, the 10-year Treasury currently yields 161 basis points more than its German counterpart. That’s still near this year’s high, and is among the widest spreads since the turn of the century.

Turning to the Federal Reserve, two changes have occurred recently that may be playing a role in bond volatility.

Put together, the two changes and the ongoing public debate among Fed officials about what to do about bond-buying and rates may have caught off guard people who were expecting the central bank to let economic growth and inflation run hot for years to come.

As for Covid and the rise of the more contagious Delta variant, the concern about new economic restrictions is gaining traction.

Japan has just announced that it will not allow any spectators to attend the Olympic Games due to a sudden rise in infections. Japan and other Asian countries have much lower vaccination rates than the U.S., raising the risk that more health protection measures may be put in place and global supply chains might be disrupted. Indonesia may be the next hot spot after India’s recent troubles.

On a global basis, however, the Covid case count is stable and the number of deaths is tumbling. In the United Kingdom, where cases are rising sharply due to Delta, mortality remains low. The vaccines appear to be doing their job of reducing the worst-case outcome of the disease, making it unlikely – in our view – that new restrictions will occur in the U.S. and other countries with high vaccination rates.

The Fed’s shift, and the rise of the Delta variant, may together explain why some market participants are worried about a growth scare – meaning a downshift in GDP growth – which is causing an unwinding of so-called reflation trades.

What Does it All Mean for Goals-Based Plans?

This may end up being a tempest in the bond market tea cup. In Horizon Investments’ view, markets are digesting the meaning of several recent events, but the big picture has yet to change.  The stock market, for example, was at record highs this week. Despite the unclear reasons for the bond market move, investors don’t appear to be concerned about the prospects for earnings and revenue growth.

Horizon believes it may be a good idea for financial advisors and their clients to not make any major adjustments if they have a diversified portfolio. In our view, the recovery of the U.S. economy should continue, the jump in inflation still appears to be temporary and the Federal Reserve – along with other major central banks – is not yet reducing their highly stimulative monetary policy stance. Taken together, we still believe the long-term economic path is for moderate GDP growth and tame inflation: conditions that are a favorable backdrop for market valuations.

Nothing contained herein should be construed as an offer to sell or the solicitation of an offer to buy any security. This report does not attempt to examine all the facts and circumstances that may be relevant to any company, industry or security mentioned herein. We are not soliciting any action based on this document. It is for the general information of clients of Horizon Investments, LLC (“Horizon”). This document does not constitute a personal recommendation or take into account the particular investment objectives, financial situations, or needs of individual clients. Before acting on any analysis, advice or recommendation in this document, clients should consider whether the security in question is suitable for their particular circumstances and, if necessary, seek professional advice. Investors may realize losses on any investments. Index information is intended to be indicative of broad market conditions. The performance of an unmanaged index is not indicative of the performance of any particular investment. It is not possible to invest directly in an index. The visuals shown above are for illustrative purposes only and should not be considered a guarantee of success or a certain level of performance. More information about the calculations used in this article are available from Horizon Investments.

This material has been prepared for informational purposes only. Horizon Investments does not provide tax advice. Investors are strongly advised to consult with their tax advisors regarding any potential investment or specific tax questions and obligations.