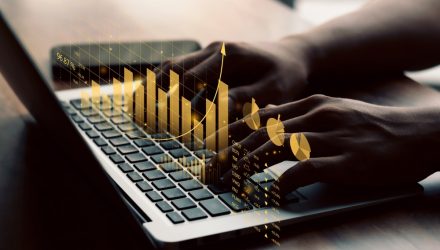 Once again, we would like to introduce you to an informal advisor to the firm, Nobuya Nemoto, who brings an economist’s perspective to the team. His bio is provided at the bottom. As we have highlighted in past Nobu Notes, we think it important to attach our newsletter, A New Regime, as it appears that the Fed and other central banks will be continuing their tightening path.

Now on to his thoughts…

“Higher for longer”: As broadly anticipated, the Fed delivered yet another 0.75 percentage point rate hike (the third in a row) bringing the benchmark Fed Funds target range to 3.00 to 3.25%. In line with its hawkish concerted communication campaign since the Jackson Hole Symposium in late August, the Fed clearly signaled its intention to keep interest rates “higher for longer”. The so-called dot plot released at the same time shows the FOMC members collectively penciling a trajectory of the Fed Funds rate that is almost a full percentage point higher over the next 18 months, compared to the previous set of projections. 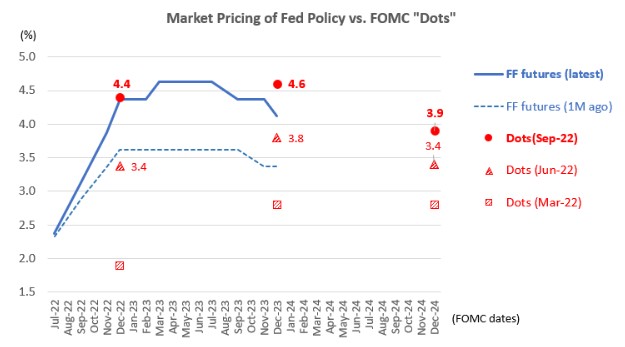 The R-word…: During the press conference, Chairman Powell noted that “a long period of below trend growth” would be necessary. The official growth forecasts have been ratcheted down, more commensurate with the tough task the Fed has to face in order to bring down inflation.  to bring inflation down. Following the technical recession during the first six months of this year, the Fed expects the economy to grow by a paltry 1.0% during the second half, followed by a mere 1.2% next year. With the standard errors around Fed’s growth projections estimated to be as wide as +/-1.8% (Fed’s own calculations), no wonder Powell sounded much more agnostic as to whether a recession can be avoided:

Fed Funds rate with a 5%-handle?: While the FOMC’s central message and projections have come a long way to reflect the strong stagflationary dynamics buffeting the economy, the balance of risks looks still skewed toward the Fed having to do more to get inflation under control. Actually, part of Powell’s narrative hints at such a possibility: 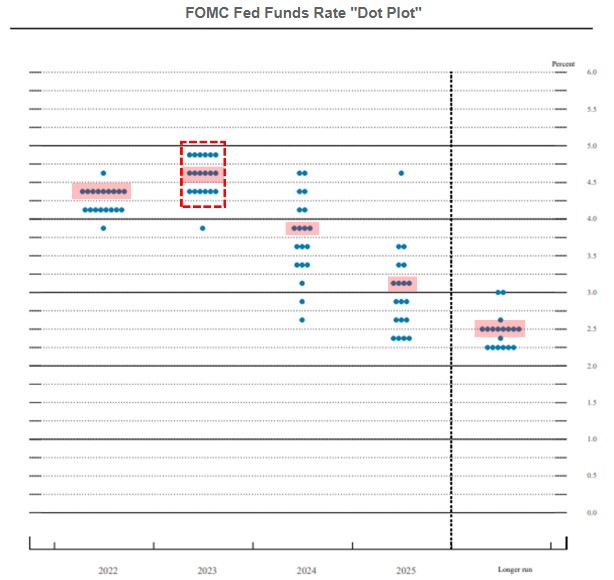 Real rate vs. business cycle: As many market commentaries have been pointing out recently, a positive real FF policy has tended to precede recessions, which in turn were followed by sizable reductions in core CPI inflation.  The real FF rate measured simply as nominal FF rate minus realized (core) CPI inflation remains deeply in negative territory, even after today’s rate hike announcement. It could perhaps explain the relative resilience of the economy so far, but in any case, the historical stylized fact strongly suggests that the Fed might have additional catching up to do.

Commodities vs. core inflation: One interesting aspect of the relationship between business cycles and the inflation dynamics is the correlation between core CPI vs. food & energy components, which has tended to be prominently positive around recessions while remaining muted or negative in other times. Without a recession, the peak out (if any) of energy and food prices might not necessarily translate into a swift moderation across a broader segment of consumer prices.

Heteroskedasticity…: Last but not least, inflation in statistical jargons is both non-stationary and heteroskedastic; it exhibits non-constant mean and variable standard deviation. Historically, the standard deviation of CPI data tends to be higher when inflation is high. Given the still elevated levels of actual inflation, investors need to be prepared for the prospects of persistent high degree of variability in monthly CPI releases that could be prone to surprises (relative to consensus) and hence exacerbate market volatility.

Nobuya Nemoto has a background in macroeconomic and quantitative research. Nobuya was one of the founding partners of Washington-based Potomac River Capital LLC (“PRC”; a macro hedge fund) as the Head of Strategy and Quantitative Research, and helped the fund grow its AUM twentyfold over the course of 10+ years. Prior to PRC, Nobuya was a Managing Director at Citigroup Asset Management (“CAM”) heading its Capital Market Research in charge of developing CAM’s global asset allocation platform and served as a senior member of the Asset Management Committee that produced key asset allocation decisions for firm-wide balanced products. Before joining Citigroup, Nobuya was the Chief Japan Economist at Nomura Securities, ranked multiple times as one of the top three research teams by Institutional Investor Magazine. He has a BA in International Economics from the University of Tokyo and pursued doctoral studies in economics at Columbia University under Nomura’s sponsorship. Nobuya resides in London, UK with his wife and two cats.