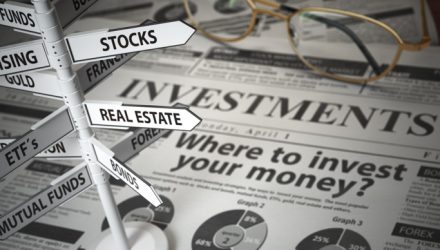 The exchange traded fund universe has been steadily expanding but it unexpectedly shrunk in the month of May, experiencing its first month of global net outflows in over five years.

According to ETFGI data, investors yanked $4.5 billion from global ETFs in May, breaking a back-to-back monthly inflow streak that dated back to January 2014, the Financial Times reports. While data for the Australian ETF market will not be released later this week, the finalized tally won’t likely change too much.

An escalating trade war between the U.S. and China, along with concerns over slowing global economic activity, triggered a swift selloff in the equity markets, with the benchmark S&P 500 Index retreating 6.6% in May. Foreign benchmarks in Europe and Asia did not fare any better either.

Due to the broad risk-off nature over the past month, the weakness in stocks was mirrored in equity ETFs, which experienced a global net outlfow of $19.1 billion over May.

In total, net cash inflows so far this year for the whole ETF industry hit $140.6 billion, or 18.8% lower for the first five months year-over-year.

The slowdown in inflows has also helped some players in the ongoing ETF races as competition among fund providers grow increasingly intense. BlackRock’s iShares ETFs saw net inflows so far this year fall 24.5% year-over-year to $37.8 billion.

Meanwhile, Vanguard, the second-largest ETF player in the space, narrowed its gap with BlackRock, the world’s largest money manager. Vanguard added $33.6 billion in net inflows over the first five months of the year, up 17.9% on the same period year-over-year.

“Market conditions were more challenging for equity investors in May due to the escalation in trade tensions between Washington and Beijing and the threat that the US could extend tariffs to imports from Mexico,” Deborah Fuhr, managing partner at ETFGI, told the Financial Times. “The decline in global ETF flows in May was relatively modest and it is too early to judge after just a single month of outflows whether this is just a temporary pause or an indication of a more difficult phase for new business growth.”