You are at:Home»ETF Education channel»Up 255%, This Solar ETF Will Have Even More Days in the Sun 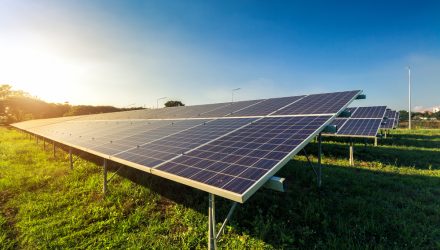 Up 255%, This Solar ETF Will Have Even More Days in the Sun

A recent pullback in clean energy stocks portends opportunity with several exchange traded funds, including the Invesco Solar ETF (TAN). New data is confirming the durability of solar power during the coronavirus pandemic.

TAN could rebound over the near-term because the Biden Administration is feeling pressure to make good on campaign promises. That includes sizable renewable energy spending in the upcoming $2 trillion infrastructure proposal.

Emerging markets are also taking a cleaner approach as they try to cut down on pollution. For example, China, the world’s second-largest economy, has suffered from heavy pollution after it quickly industrialized its economy. Yet the country has also heavily adapted to solar as a means to combat the rising pollution and shift away from dirty coal.

“Running counter to broad swaths of the infrastructure sector, performance-related downgrades in 2020 did not deviate from historical norms. ‘The ongoing global pandemic has had a muted impact on this class of credits that are largely insulated from demand risk and have remained operationally stable,’ said Senior Director Andrew Joynt,” notes Fitch.

Not only is clean energy consumption increasing, but costs are also decreasing, which in turn bolsters adoption. Additionally, coal production is slumping, adding to the virtuous cycle for alternative energy ETFs. Declining solar costs are expected to lure more corporate and residential customers, particularly in the solar market.

“Meaningful changes are underway in the renewables sector. Ever-growing corporate sustainability goals should continue to fuel the growth of commercial and corporate PPAs. ‘The typically shorter tenors of these contracts suggest that we will continue to see more financings that stretch into a merchant period,’ said Joynt,” according to Fitch.