You are at:Home»ETF Education channel»Invesco’s ‘PPA’: An A&D ETF for Returns to Take Flight 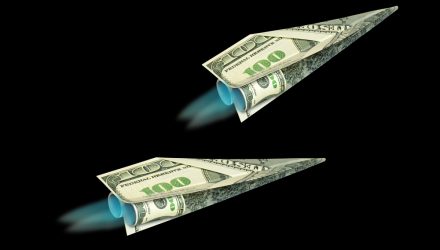 Invesco’s ‘PPA’: An A&D ETF for Returns to Take Flight

Analysts and market observers are growing increasingly bullish on aerospace and defense equities and that’s good news for exchange traded funds such as the Invesco Aerospace & Defense ETF (PPA).

PPA seeks to track the investment results (before fees and expenses) of the SPADE® Defense Index. The fund generally will invest at least 90% of its total assets in the securities that comprise the underlying index, which is composed of common stocks of companies that are engaged principally in the development, manufacture, operation, and support of U.S. defense, military, homeland security, and space operations.

“Inoculation programs are kickstarting around the globe, and Deutsche Bank is getting bullish on the upside this presents for the aerospace and defence sector, particularly as air travel gradually resumes,” reports Business Insider.

Why Aerospace and Defense Now?

While big names like Boeing have taken a hit due to the pandemic, PPA also mixes in large cap movers and shakers in the defense industry like Lockheed Martin and Northrop Grumman. Other names within their top 10 holdings include Raytheon Technologies and Honeywell International.

“Deutsche said the main beneficiary of the vaccine rollout should be the so-called ‘narrow-body’ aircraft – typically single-aisle jets that can seat up to six on either side and are used for short-haul domestic flights – as only requirement the approval of the national government is required,” adds Business Insider.

PPA skews its holdings toward large cap companies, which is what you want when diving for quality. With a lot of market uncertainty still lingering, large caps can help mute the effects of a downturn better than their small cap brethren.

“Moreover, leisure passengers will be the first to come back first on domestic routes, rather than business travellers. Anyone travelling for pleasure would tend to make their own decisions and pent-up demand among these passengers is huge, Deutsche said,” continues Business Insider.

Low interest rates could be a boost for defense names because industrials usually benefit from lower rates. Some of the sectors likely to receive a boost after the Fed starts cutting rates include Materials, Industrials, Consumer Discretionary, and Consumer Staples.

“Geopolitical tensions between China and Russia and the US, as well as Europe, may also present a tailwind for the sector, Deutsche said. President Joe Biden is not expected to change the US stance much and, therefore, defence budgets should not see any cuts for the next two to three years, Deutsche Bank believes,” concludes the article.