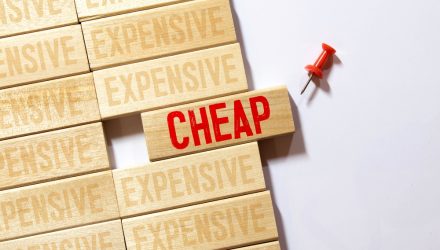 When choosing between two exchange traded funds that track similar themes or markets, long-term investors are increasingly steering toward the cheaper options.

For instance, the widely observed and still highly popular SPDR S&P 500 ETF Trust (SPY) remains a go-to investment option to gain broad exposure to the U.S. equity markets. However, SPY has suffered some $25 billion in outflows year-to-date, according to Bloomberg.

Meanwhile, the SPDR Portfolio S&P 500 ETF (SPLG) has attracted a little over $3.0 billion in net inflows, with only 32 days of redemptions.

The shifting ETF fund flows are also seen with other similar ETF products that track the same benchmarks. For example, the Invesco QQQ Trust (QQQ), a popular play to track the technology-heavy Nasdaq-100, experienced almost 70 days of cash outflows year-to-date. Meanwhile, the Invesco NASDAQ 100 ETF (QQQM) only saw 20 days of redemptions. Nevertheless, both QQQ and QQQM both saw positive net inflows so far in 2022.

“For a retail or purely buy-and-hold investor who is looking for a position for the longer term, cheaper ‘mini’ ETFs that offer identical access make a lot of sense because they don’t have to spend more for that massive liquidity,” ETF Think Tank’s Cinthia Murphy told Bloomberg.

When it comes to long-term investing, fund fees or the expense ratio plays a larger role for buy-and-hold investors, especially due to the effects of compounding over time. With lower expenses, investors can save more in the long run, which results in better long-term performances between two identical fund strategies.

However, some investors still choose to stick with the larger more expensive SPY and QQQ due to their high liquidity, which is much more convenient for large or institutional-sized traders who are making quick block trades to go in and out of the market in an efficient manner, often on an intra-day basis.

“SPY is the most liquid security on the planet,” Bloomberg Intelligence’s James Seyffart said. “You add in the options and futures and everything,” Seyffart added, “and nothing else comes close.”

“It might look on the surface like you’re just launching a clone of an older fund with a lower expense ratio because people are complaining about the management fee. That’s usually not the whole story,” Invesco’s Jason Bloom, head of fixed income and alternatives ETF strategies, told Bloomberg. “It’s going to take many years to build assets under management up to levels that might be comparable to the older fund. So the older fund may have a much deeper liquidity profile and it’s going to stay relevant.”