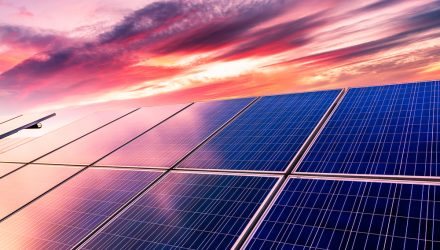 Over its more than 13 years on the market, the Invesco Solar ETF (TAN), the largest exchange traded fund focusing on solar stocks, has provided investors with an efficient avenue for playing energy evolution.

A significant part of the long-term thesis for solar is the industry’s ability to achieve scale and drive costs lower, making adoption of commercial and residential solar more attractive to end users. That’s a mountain the industry continues to conquer. Looking ahead, new sources of growth need to be realized, particularly with cost efficiencies, though still attractive, starting to flatline.

“With savings in equipment manufacturing hitting a plateau and more recently pressured by rising prices of raw materials, producers are stepping up work on advances in technology — building better components and employing increasingly sophisticated designs to generate more electricity from the same-sized solar farms,” reports Dan Murtaugh for Bloomberg.

For roughly two decades, TAN components attracted investors based in large part on declining costs and soaring demand. The latter is still in place in a big way, but the former is showing signs of lethargy. That puts some pressure on TAN member firms to evolve with the times in the renewable energy arena – a space already known for rapid evolution.

Solar costs are tumbling, but a new solar opportunity is the ability to effectively pair solar with still pricey battery storage technology. If prices for the latter can follow a similar trajectory to solar, TAN could continue its stellar long-term trajectory because it’s often storage prices that prompt customers to balk at renewable energy systems.

“Bigger factories, the use of automation and more efficient production methods have delivered economies of scale, lower labor costs and less material waste for the solar sector. The average cost of a solar panel dropped by 90% from 2010 to 2020,” according to Bloomberg.

Another avenue in which TAN holdings can evolve – and some are already doing so – is to increase the power generating capacity of solar modules. Fitch Solutions sees that happening in the near-term.

“Solar module manufacturers continue to make advancements towards the commercial deployment of ultra-high efficiency solar modules, with the latest generation exceeding 600W capacity – an increasingly important benchmark in a highly competitive market,” according to the research firm.