You are at:Home»ETF Building Blocks Channel»The Midstream Space Is Cleaning Up Its Act 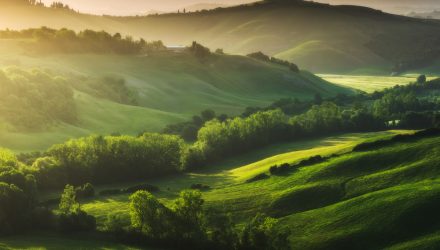 The Midstream Space Is Cleaning Up Its Act

Investors considering ETFs like the Alerian Energy Infrastructure ETF (ENFR) typically do so to gain conservative exposure to the energy patch while garnering above-average levels of income.

However, the midstream energy infrastructure space is evolving with the times and getting in on the renewable energy transition. The latest example of that evolution is Kinder Morgan (NYSE: KMI) saying last Friday it’s acquiring Kinetrex Energy for $310 million.

“Kinetrex is the leading supplier of liquefied natural gas (LNG) in the Midwest and a rapidly growing player in producing and supplying renewable natural gas (RNG) under long-term contracts to transportation service providers,” according to a statement issued by Houston-based Kinder Morgan.

That stock accounts for 5.56% of ENFR’s roster and is the fifth-largest holding in the exchange traded fund.

“Kinetrex has a 50% interest in the largest RNG facility in Indiana as well as signed commercial agreements to begin construction on three additional landfill-based RNG facilities. Once operational next year, total annual RNG production from the four sites is estimated to be over four billion cubic feet,” said the buyer.

For those not familiar, RNG (renewable natural gas) is the very definition of a renewable energy source as it comes from agriculture waste, landfills, and and wastewater treatment facilities.

Kinder Morgan expects to ramp up three RNG facilities over the next 18 months.

Pembina and TC Energy combine for 12.55% of ENFR’s roster.