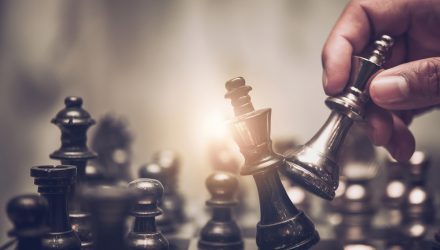 Politics Could Help This ETF, but It’s Not Election-Dependent

In theory, the occupant of the White House and the controlling parties of each house of Congress can have an impact on the performance of energy equities – both alternative and traditional.

The theory usually goes something like a Republican president should be good for fossil fuels producer and Democrat president should benefit alternative energy names. The ALPS Clean Energy ETF (ACES) is defying that logic with a gain of almost 45% over the past year.

“Joe Biden announced a new plan on Tuesday to combat climate change that would cost $2 trillion over four years. The plan appears bolder than the former vice president’s previous climate initiatives because it spends more money sooner to back major shifts in U.S. energy,” reports Avi Salzman for Barron’s.

“The plan, if enacted, could boost electric vehicle makers and utilities that have already begun shifting their power generation to renewable sources.”

As noted above, ACES is performing well with a Republican in the White House, though that speaks more to the shift to renewables and declining costs than Trump Administration-specific action. Adding to the long-term case for ACES is that many of the policies benefiting renewable energy producers are taking place at the state level, indicating ACES and rival funds can deal with changes in the White House. However, a change could benefit the ALPS fund.

“One central tenet of the (Biden) plan is that the U.S. will generate net-zero emissions from electricity generation by 2035. In 2019, 63% of U.S. power generation came from fossil fuels, with nuclear power accounting for about 20% and renewables making up about 18%,” according to Barron’s.

For solar, factors like declining costs and a federal tax credit. However, a more friendly tone toward China via a Biden White House could also add to the ACES case. A pivotal factor in determining whether the solar energy industry can continue its strength is trade.

Should Biden win this November, coal and natural gas stocks would likely be punished through repudiation of the latter may not be too severe simply because it will take years to move natural gas-powered electrical grids over to alternative energy sources.