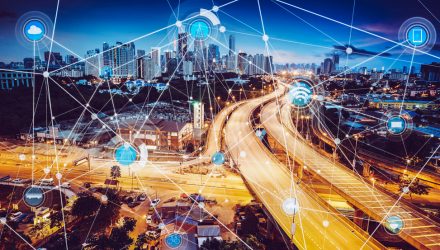 Midstream energy companies are poised to pass on large-scale consolidation and the focus on reining in purse strings could be to the benefit of investors considering the Alerian Energy Infrastructure ETF (ENFR).

“Equitrans Midstream Corp.’s merger with EQM Midstream Partners LP was the only billion-dollar deal announced during that period (first half 2020) for which transaction value was available, a steep decrease from at least eight transactions exceeding $1 billion that were announced during the first six months of 2019,” reports S&P Global Market Intelligence. “National Fuel Gas Co.’s acquisition of Royal Dutch Shell PLC’s Appalachian upstream and gathering assets for $541 million was the second-largest deal, with the rest exceeding no more than $195 million each.”

Reduced Spending has its Advantages

Midstream firms are also dealing with leverage in a fashion superior to many exploration and production outfits, spotlighting ENFR as yield-producing instrument with components that aren’t sporting flimsy balance sheets.

Recent consolidation in the midstream space has been more about asset sales than outright takeovers of companies.

“While several transactions in the first half of 2019 involved whole or minority stakes at the corporate level, activity for the same period in 2020 was primarily asset-based as companies tightened their belts. An oil price war between Saudi Arabia and Russia, combined with the dwindling demand for fuels as COVID-19 spread rapidly, forced midstream companies to slash spending and investor payouts, putting M&A on the back burner for many management teams,” according to S&P Global Market Intelligence.

ENFR, which yields 8.76%, is higher by 24.66% over the past 90 days, indicating there are indeed benefits to financial prudence displayed by midstream operators.