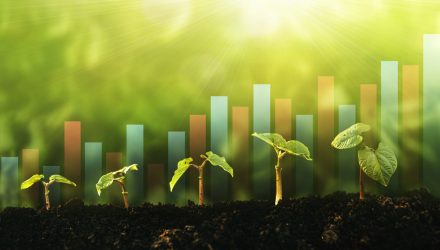 In the Midstream Space, ‘AMLP’ Could Now Mean Green

Traditional fossil fuel companies and their renewable energy counterparts are often pitted against each other. The former is seen as a prime contributor to pollution and and viewed as a lumbering, old industry with its best days behind it.

On the other hand, renewables providers are often nimble growth companies. Yet many older producers, including midstream names residing in the ALPS Alerian MLP ETF (NYSEArca: AMLP), are looking to play increasingly prominent green energy roles.

For decades, the bread and butter of midstream companies and master limited partnerships (MLPs) was the processing, storage, and transportation of natural gas and oil. However, the energy landscape is rapidly changing, and many producers must adapt or die.

“Consistent with recent quarters, opportunities related to the energy transition and renewables were a common topic across earnings calls,” says Alerian Director of Research Stacey Morris. “For many companies, these evaluations are in their early stages. Investors will largely need to stay tuned for more details around potential projects and initiatives involving carbon capture, hydrogen, renewable diesel and related feedstocks, renewable natural gas, and other opportunities around sourcing power from wind or solar facilities.”

As one example of a midstream name turning an eye towards renewables, Williams Cos. (NYSE: WMB) has identified three new solar projects, bringing its backlog to 16. While Williams isn’t an AMLP holding, some of the fund’s components are boosting their green energy footprints.

“While details remain limited, some companies provided a glimpse under the hood into projects being developed,” adds Morris. “ET’s management indicated that they are working on a carbon capture project at the Marcus Hook terminal, which appears viable even without federal tax credits. Enbridge (ENB) mentioned the potential for a carbon dioxide trunkline in Northern Alberta and also expanded on its recently announced renewable natural gas partnership with Walker Industries – a major landfill player – and Comcor Environmental. In addition to the Niagara project that is under construction, the partners are looking at 10-15 other opportunities currently.”

“ET” refers to Energy Transfer (NYSE: ET), AMLP’s biggest constituent at a weight of 11.43%. EnLink Midstream (NYSE: ENLC) has its own clean energy ambitions, with a goal of being net zero for carbon by 2050. That small cap midstream name accounts for 3.14% of AMLP’s roster.