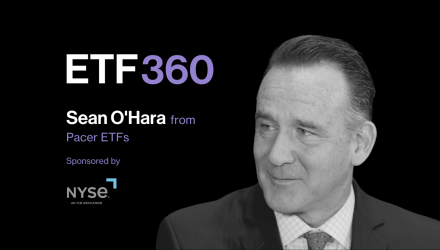 In the most recent episode of “ETF 360,” VettaFi head of research Todd Rosenbluth was joined by Pacer’s Sean O’Hara to discuss the Pacer Lunt Large Cap Alternator ETF (ALTL).

2022 has been a solid year for low-risk and high-beta strategies, which have managed to find periods of time where they’ve really worked. “This has kind of been a funny year in the stock market,” O’Hara said. “We’re fighting against the headwinds of higher interest rates and inflation.” He attributed some of the fits and starts in the market to small rallies that come when it seems like the Fed has been tamping down on inflation successfully, and then the stops that hit when evidence that inflation hasn’t slowed all that much comes to the surface.

In these unusual market conditions, ALTL is a product that is built for both risk-on and risk-off environments. According to O’Hara, “ALTL is a revolutionary approach to factor investing.” He classified the strategy as “dynamic factor investing.” He noted, “What ALTL is doing is it’s using two individual baskets that S&P published.” Every month, ALTL runs a relative strength screen between a 100-stock high-beta basket and a 100-stock low-vol basket, opting to own whichever one comes out stronger.

The thinking is that though a single factor can outperform the market over time, those factors can sometimes be out of favor for long stretches. ALTL’s dynamic approach has led to solid performance. O’Hara noted that for seven of the first 10 months of the year, it was in the low-vol basket. “That ability to switch from one to the other as the overall market changes or the relative strength changes gives you an opportunity to produce what we think are going to be higher returns than the broader market,” he said.

ALTL has produced double the returns of the S&P 500 over the past two years. Over the life of the product, it’s roughly split its time between the two factors. “It’s also producing higher returns than each of the two factors themselves,” O’Hara noted. He said that the monthly analysis doesn’t have to be right every month, and so long as it is right more often than it is wrong, that should generate extra return.

O’Hara said this is a good product for single-factor investors who don’t want to suffer through the downswings and that it could also be used as portion of a core portfolio.