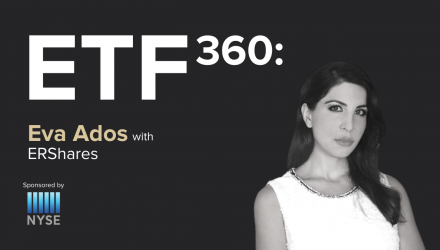 For this week’s episode of ETF 360, ETF Trends CEO Tom Lydon and CIO Dave Nadig spoke with Eva Ados, COO and Chief Investment Strategist for ERShares, to chat about entrepreneurial-led companies and its new Women-Led Entrepreneur strategy launched in partnership with EntrepreneuA.

Ados explains how ERShares invests heavily in these companies, with an eye toward their organization, infrastructure, research & development, and how they look to the future, instead of just quarter to quarter.

As visionaries, innovative thinking can help deliver goods and services tailored to the way people actually live their lives.

Nadig pointed to the two approaches ERShares has on the market, namely the ENTR and ERSX ETFs.

Ados explains that ENTR is the established entrepreneur ETF, primarily based in the United States. It tends to be larger in market cap size, and typically doesn’t include banks.

ERSX is for up-and-coming entrepreneurial companies that can be found anywhere in the world. They are small in market cap size, and represent ideals that ERShares feels can make them entrepreneurial leaders well into the future.

What distances these two funds from others attempting to capture innovation? Namely the ERShares Entrepreneur Factor, developed more than 15 years ago. The continued use of this metric has led to excess returns over the period of study.

Ados notes that “now, entrepreneurs can be found in any geography, and any market cap size, so this entrepreneur factor allows us to identify them wherever they may reside.”

International Women’s Day was on March 8. Women’s History Month runs the whole month of March. As Ados explains, ERShares has discovered that in taking out the women’s sleeve, entrepreneurial companies that have women in key leadership positions would result in similar if not better returns compared to the underlying constituents, which already have exceptional returns.

Ados adds that “we decided to create a new strategy that focuses on entrepreneurial companies that have women in key leadership positions, and at the same time, since in the U.S. right now, more than half of the wealth is managed and controlled by women, and they’re looking probably for a new home, which is commensurate with their personal beliefs – this is a good choice for them now.”