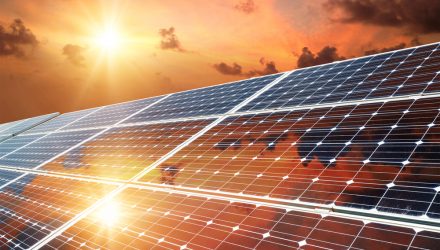 However, there are other factors at play for ETFs such as the SPDR Kensho Clean Power ETF (CNRG). CNRG is a diversified play on renewable energy equities, but it does count several solar equities among its components.

“A group of large US solar developers have committed to spend more than $6 billion on domestically produced equipment to help build the nation’s struggling panel-making industry. The group, which includes AES Corp. and Clearway Energy Group, is seeking manufacturers that will be able to supply as much as 7 gigawatts of solar modules annually starting in 2024,” according to Bloomberg.

That commitment could signal willingness among manufacturers to finally, in earnest, produce solar products here in the U.S. — something they’ve been reluctant to do for years amid fear they’d lose premium pricing power.

“The new initiative is a sign that longstanding market trends may shift. The vast majority of solar panels installed in the US are imported from Asia, but several trade disputes have roiled the industry, complicating development plans for many installers,” added Bloomberg.

Over time, this could be a material development for CNRG because the ETF features several solar names among its top 10 holdings. One of those is JinkoSolar Holdings (NYSE:JKS) — a stock some analysts are somewhat bullish on over the near term. JinkoSolar is CNRG’s ninth-largest holding at a weight of 2.64%.

“According to Schaeffer’s Senior Quantitative Analyst Rocky White’s latest study, JKS is within one standard deviation of its 60-day moving average. The security has seen six similar signals over the past three years, and was higher one month later 50% of the time, averaging a 19.3% gain for that period. A comparable move from JKS’ current perch would place it over the $74 mark for the very first time since January 2021,” noted Schaeffer’s Investment Research.

Potentially fueling a run in JinkoSolar is the fact that short sellers are covering bearish bets on the CNRG holding and could be compelled to do the same on other solar names, including other CNRG member firms.

“Short sellers have already started to hit the exits, but there is plenty of pessimism left to be unwound, which could push the shares higher still. Short interest is down 14.6% in the last two reporting periods, yet the 3.10 million shares sold short still make up 7% of JinkoSolar stock’s available float,” concluded Schaeffer’s.