By Michael Markowski via Iris.xyz

Due to the violent increase in volatility which occurred during August, the S&P 500 finds itself in an extremely vulnerable position for the last week of the summer of 2019. The volatility has increased the risk that the S&P 500 could decline by more than 100 points or 3% and could return to test its March and June lows in early September. Should this happen the secular bull market which began in March of 2009 could be over. The S&P 500’s chart pattern for August 2019 is reminiscent of the index’s late October through early December 2018 chart pattern. 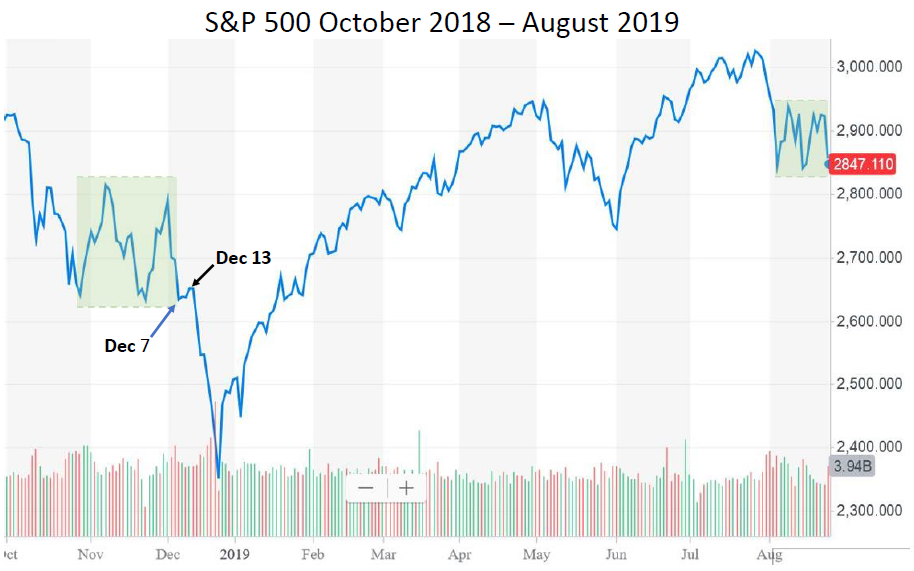 The shaded green area on the left side of the above chart depicts that the whipsawing volatility between October 29 and December 7, 2018 finally exhausted the bulls. After the S&P 500 was unable to muster a meaningful rally during the first four days of the week beginning December 10th, the index crashed through its October 2018 low on Friday, December 14th. Then for the next week ended December 17th, the S&P 500 crashed to below its low for 2018 which occurred in February.

The S&P 500’s chart pattern for August 2019, is very similar to the October to December 2018 pattern. The difference is the whipsaws for August 2019 occurred within a much shorter time horizon. Due to the much shorter periods between the peaks and troughs, the S&P 500 could break back to its March and June lows during the first week in September unless it closes above 2900 this week. A close below 2900 for the week would confirm that the bulls are exhausted. Should that happen a correction to 2744 to retest the March and June lows, which is depicted in the chart below, could begin as soon as the first week of September.