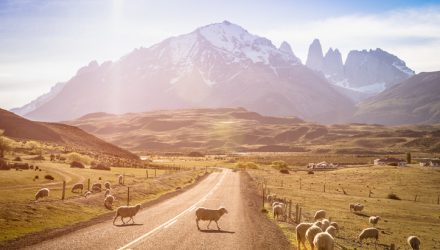 A Chile country-specific ETF plunged Monday after violent protests over the weekend caused the military to intervene, and a state of emergency was enacted in the capital city of Santiago.

Meanwhile, the Chilean peso currency fell 2.2% to $0.1376 and was on pace to mark its biggest one-day decline in over six years.

The military took charge of security in Santiago after youth protests against fare hikes on public transport enacted earlier this month turned to vandalism and arson, Reuters reports.

President Sebastian Pinera also extended the emergency rule to cities to the north and south of the capital. He also claimed that the country was “at war” with a violent enemy.

“The events were entirely unexpected and should lead to a weaker CLP in the near term,” analysts at Citigroup said in a note. “We don’t expect the weakness to sustain unless the situation deteriorates much further.”

Risk Of An Interest Rate Cut

Citigroup also argued that the risk of an interest rate cut by the central bank later this week has increased after the protests, which would further put downward pressure on the peso currency.

The violent protests against rising living costs have caused the deaths of at least 11 people, with five deaths a result of looters torching a garment factory near the capital, BBC reports.

There have been 70 “serious incidents of violence,” along with 40 lootings of supermarkets and other businesses. Two individuals also received gunshot wounds after a clash with police, officials added.

Related: Argentina ETF Could Find a Helping Hand from the IMF

“We’re facing a real escalation that is undoubtedly organized to cause serious damage to our country and the lives of each of its citizens,” Interior Minister Andrés Chadwick said.

“We’re very aware that [those behind the riots]have a degree of organization, logistics, typical of a criminal organization,” Pinera said. “I call on all my compatriots to unite in this battle against violence and delinquency.”