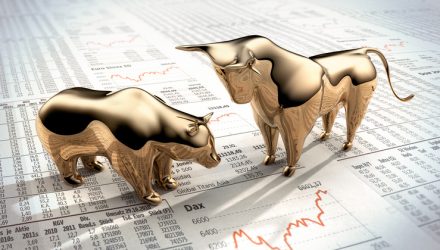 U.S. markets and stock ETFs pushed to new records Monday on a possible U.S.-China trade and ahead of a week packed with corporate earnings, a jobs report update and a Federal Reserve meeting.

“We are going to maybe trade up a little bit higher in the short term and (pull back) after the earnings season and the rate cut,” Robert Pavlik, senior portfolio manager at SlateStone Wealth LLC, told Reuters.

Fueling the risk-on attitude Monday, President Donald Trump said he will sign a significant part of the trade deal with China ahead of schedule. His statement added to last week’s optimism when Washington stated it was “close to finalizing” some parts of a trade agreement.

Further adding to the upbeat sentiment, the Fed is widely expected to cut interest rates at its two-day policy meeting ending on Wednesday. According to CME Group’s FedWatch tool, the odds for a quarter percentage point cut stood at 94% compared to 49% last month.

The better-than-expected corporate earnings season has also helped support ongoing strength in the equities market. Over 78% of the 204 S&P 500 companies reported so far have surpassed profit expectations, according to Refinitiv data. Nevertheless, S&P 500 company earnings are projected to dip 2%, but excluding the energy sector, the group’s earnings is forecasted to rise 0.5%.

“For the market to move higher from here, you would definitely need earnings upgrades,” Anik Sen, global head of equities at PineBridge Investments, told the Wall Street Journal. “The earnings upgrades are going to be more company-specific. A lot of management teams have been investing in productivity.”