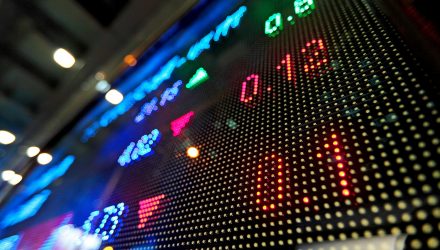 U.S. markets and stock exchange traded funds somewhat pared earlier losses in the day but they were still heading toward their worst week of 2019 after President Donald Trump revealed the trade spate between China could continue.

On Friday, the Invesco QQQ Trust (NASDAQ: QQQ) was down 0.5%, SPDR Dow Jones Industrial Average ETF (NYSEArca: DIA) was flat and SPDR S&P 500 ETF (NYSEArca: SPY) fell 0.1%. While the broad markets are still positive this year, the S&P 500 was on pace for its worst weekly dip since late December.

Friday’s market swings were attributed to Treasury Secretary Steven Mnuchin remarks on CNBC over trade talks that seemed “constructive” after Trump in a series of tweets early in the day continued to push for tariffs as a good thing for the U.S. economy, following the increase in U.S. tariffs on $200 billion in Chinese imports to 25%, the Wall Street Journal reports.

Trump also revealed that the U.S. will continue to negotiate with China, but there is “absolutely no need to rush,” catching many market observers, whom previously expected a step forward on negotiations, off guard.

“This looks like an all-out breakdown,” Mike O’Rourke, chief market strategist at JonesTrading Institutional Services, told the WSJ. “As the trading day goes on and after the series of tweets the president sent off this morning, people are realizing this situation is not going to be resolved anytime in the near future.”

The latest tariff highs could exacerbate the prolonged trade war. Beijing said it wold retaliate in response to the higher U.S. tariffs.

Consequently, many are hunkering down in anticipation of further market volatility.