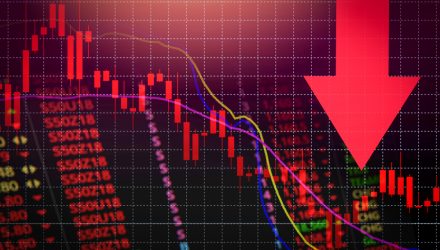 U.S. markets and stock exchange traded funds retreated Thursday after data out of the labor market and Federal Reserve comments fanned concerns over the ongoing battle with the coronavirus and its lingering effect on the recovering economy.

According to the Labor Department, filings for jobless benefits held steady at 860,000 last week, but layoffs remain elevated despite some signs of a broader labor-market recovery, the Wall Street Journal reports.

Further adding to the negative sentiment on Thursday, investors couldn’t shake off comments from Federal Reserve Chairman Jerome Powell, who said that the economic outlook is “highly uncertain.” Policymakers revealed concern that easy gains from reopening the economy could be covering deeper scars among vulnerable businesses, with prospects of a prolonged period of joblessness. The central bank also reassured markets that interest rates would stay near zero until 2023.

“The Fed said it would keep rates low for ages. But that’s not enough,” James Athey, senior investment manager at Aberdeen Standard Investments, told the WSJ. “Not taking away is no longer sufficient for this market. You need to do more, more, more.”

“Investors love when the Fed lowers rates because they feel that’s good for the market,” Jake Dollarhide, chief executive officer of Longbow Asset Management, told Reuters. “But if the Fed says we need to keep rates low for longer, then people start worrying about the economy itself.”

Vivian Lau, the founder of New York hedge fund One Tusk Investment Partners, argued that the Fed’s accommodative stance will be beneficial in the long-term, but for now, the markets will likely experience short-term volatility.