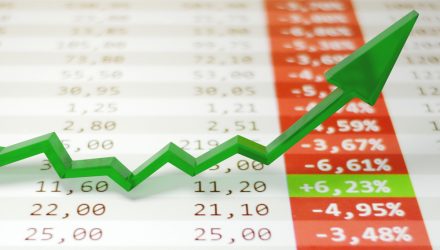 U.S. Stock ETFs Mixed But on Pace to End a Great Month

U.S. markets and stock ETFs were stuck in uneven trading, but the S&P 500 was still on pace to close out its best August in over three decades.

“It’s back to Nasdaq leadership and profit-taking in other parts of the market,” Liz Ann Sonders, chief investment strategist at Charles Schwab, told Reuters. “I worry that sentiment has gotten frothy and there’s a lot of money in the market that doesn’t see any downside risk.”

The S&P 500 and Nasdaq have regained their pre-coronavirus pandemic highs and then some after the Federal Reserve’s recent remarks on allowing higher inflation and keeping interest rates low, rising hopes of a Covid-19 vaccine, and a momentum-driven rally in technology stocks.

“They’ve confirmed lower-for-longer rates as far as the eye can see,” Richard Dunbar, head of multi-asset research at Aberdeen Standard Investments, told the Wall Street Journal. “Alongside that confirmation of cheap money and cheap discount rates, we’ve just come through a U.S. earnings season that’s been a lot better than feared.”

The three main U.S. benchmarks are on pace for their fifth consecutive monthly gain after the March lows, with the S&P 500 eyeing its best percentage rise for the month of August since 1984, despite ongoing concerns of uneven economic recovery.

Market observers are also warning of heightened political risk and increased market volatility ahead as a contentious U.S. presidential election is just around the corner.

Furthermore, market sentiment could sour if Capitol Hill fails to deliver on another economic relief package that has been priced into the markets. U.S. lawmakers are scheduled to return to work and resume talks over a new coronavirus stimulus package, following their August recess.

“There’s uncertainty about future support,” Dunbar added. “Investors are nervous generally, and keen to see support continue through low-interest rates and fiscal policy. Any discussion of that being disrupted can make investors nervous.”