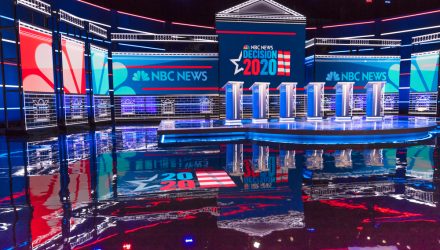 U.S. Stock ETFs Down Ahead of Presidential Debate

U.S. markets and stock exchange traded funds slipped Tuesday on some profit taking after consecutive sessions of gains as investors brace for political risk ahead with the first debate between President Donald Trump and former Vice President Joe Biden.

“It’s just the way markets work,” Vance Howard, chief executive and portfolio manager at Howard Capital Management, told the Wall Street Journal. “It’s kind of like a marathon runner. A marathon runner can only run so far and so fast without having to sit down and take a break. That doesn’t mean anything is wrong with them.”

Nevertheless, some are worried about heightened risks with market volatility on the rise as the November presidential election inches closer. Market watchers will get a taste of how the Trump or Biden will act as both face off later Tuesday night to discuss their respective stances on global events, the economy and the coronavirus pandemic.

“People will read into this debate for answers to questions about whether the results of the election will be accepted by either side,” Tony Dalwood, chief executive of Gresham House Asset Management, told the WSJ. “If there’s any uncertainty around this, that will lead to volatility.”

Investors also tried to grasp on hopes of a new spending package to support the flagging economic recovery. House Democrats revealed a trimmed down $2.2 trillion-bill for a coronavirus-relief package on Monday evening, and House Speaker Nancy Pelosi spoke with Treasury Secretary Steven Mnuchin on Tuesday morning to try and revive stalled negotiations. However, observers warned that Congress may have its hands full with the new Supreme Court justice nominee.

“A combination of the situation with the Supreme Court, and Democrats being unwilling to hand Trump a major fiscal stimulus just before the election, makes it quite unlikely that we’ll see something passed,” Sebastian Mackay, a multiasset fund manager at Invesco, told the WSJ.