You are at:Home»Equity ETF Channel»UK ETFs: Don’t Bet on the Brexit Outcome 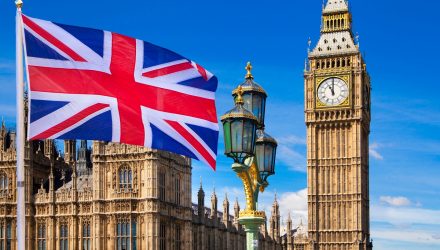 Investors may want to stay away from United Kingdom markets and country-specific ETFs ahead of the Brexit vote as Britain’s equities will likely suffer regardless of the results.

“If you get a scenario of ‘no-deal,’ clearly [the FTSE]will underperform; if you get a deal, sterling strengthens and that hinders the FTSE 100,” Christopher Mahon, director of asset allocation research at Barings, told the Wall Street Journal. “All this points to the same conclusion: Why touch the FTSE 100 before Brexit day?”

The iShares MSCI United Kingdom ETF (NYSEArca: EWU), the largest U.K.-related ETF, has already rebounded close to 8.0% so far this year, but it is still down 8.6% over the past year.

The U.K. is scheduled to leave the European Union on Mach 29, and some market observers fear that the country could exit the union without a deal on the terms of separation, which could cause disruptions in trade, travel and financial markets. Stocks and the currency would obviously suffer.

Wary investors have been sidelining U.K. markets ahead of the uncertainty. According to fund tracker EPFR Global, investors have yanked money from U.K. equity funds for 10 consecutive months. Meanwhile, global fund managers ranked the U.K. as their least favorite region to invest in, according to Bank of America Merrill Lynch’s January survey.