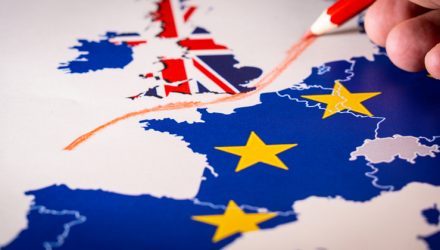 United Kingdom markets and country-specific exchange traded funds surged Friday on hopes that the country could reach an amicable divorce deal with the European Union.

U.K. markets soared, with the British pound sterling strengthening on its biggest two-day gain since 2008, on bets a deal could avert further weakening in the British economy, the Wall Street Journal reports.

Investors attributed the swift rally to comments from European Council President Donald Tusk that for the first time there was “a pathway to a deal.”

The remarks followed a meeting Thursday between U.K. Prime Minister Johnson and Irish Prime Minister Leo Varadkar where the two discussed how to unblock Brexit negotiations after a diplomatic deadlock over avoiding a hard border across the island of Ireland after Brexit that would separate the U.K.’s Northern Ireland from the rest of the country.

“It’s obvious that something in that meeting unlocked the situation,” Derek Halpenny, head of global markets research for Europe at MUFG Bank, told the WSJ. “Something meaningful” had clearly been accomplished, he speculated.

Jordan Rochester, currency strategist at Nomura Bank, argued that a Brexit deal is more likely to pass through Parliament since key euroskeptic lawmakers believe Johnson could push through looser long-term relationship with the E.U. than his predecessor Theresa May.

Nevertheless, analysts warned that there are more hurdles to cross before the October 31 deadline.