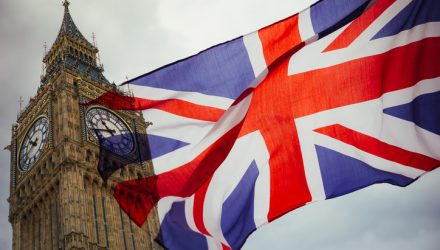 U.K. ETFs Plunge on Fears of a No Deal Brexit

United Kingdom markets and country-related ETFs retreated Tuesday on growing concerns that the U.K. could divorce the European Union at the end of next year without a trade agreement.

On Tuesday, the iShares MSCI United Kingdom ETF (NYSEArca: EWU) declined 1.7%, and the currency-focused Invesco Currency Shares British Pound Sterling (NYSEArca: FXB) fell 1.7% as the British pound dropped 1.6% against the U.S. dollar to $1.3121, its worst daily pullback in over a year.

Prime Minister Boris Johnson wants to prevent a transition period after the U.K.’s Brexit from being extended beyond the end of 2020, the Wall Street Journal reports. The U.K. will leave the union at the end of January.

A British government spokesman said the U.K. will exit E.U.’s regulatory area “in all circumstances” by the end of 2020.

The news fueled speculation that the U.K. did not secure a trade agreement with the E.U. before the end of January break up, adding to uncertainty for both exporters and importers engaging in business with the trading bloc.

“Boris’ proclamations that he can get the post-transition relationship between the U.K. and the EU resolved within 11 months are rather fanciful,” Seema Shah, chief strategist at asset manager Principal Global Investors, told the WSJ. “We have not only struggled with this conversation for more than three years, but no two major countries have ever achieved a trade deal in under three years.”

U.K. assets have been rallying in recent weeks, with the British pound touching its highest level since May 2018 after an exit poll showed Johnson to win the general election, which helped fuel bets that he would push through plans to exit the E.U. by the end of next month.

However, if a free-trade agreement is not put down by the time the transition period ends, trade between the U.K. and E.U. would experience tariffs and other barriers to normal commerce.