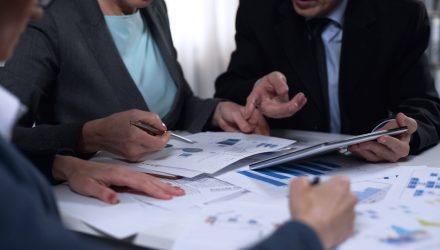 U.S. Stock ETFs Surge on Hopes for an End to Political Deadlock

U.S. markets and stock exchange traded funds climbed Wednesday on their best post-election gain ever as many anticipate the contentious election season will end the political gridlock on Capitol Hill.

Technology stocks led the charge Wednesday as investors saw a lower chance of the Democrats taking a majority in the U.S. Senate, which helped lower bets of higher antitrust scrutiny and capital gains taxes, Reuters reports.

“What’s emerging for me is that not much is going to change as a result of this election, even if Biden wins,” Peter Kraus, a former Goldman Sachs Executive who founded asset management firm Aperture Investments, told Reuters. “The Senate is unlikely to flip. Stimulus bills, investments in infrastructure, significant fiscal spending and tax changes look in a rear view mirror.”

Market observers are hoping for a definitive, swift resolution to the election to clear the way for a deal on a highly anticipated coronavirus stimulus package to aid the recovering economy. Analysts have also pointed out that many will be comfortable with President Donald Trump staying in office.

“A lot of investors think (the election) will be wrapped up in a couple of days,” Arian Vojdani, Investment Strategist at MV Financial, told Reuters. “[But] increased uncertainties such as potential court cases around the election could throw a wrench in the current market optimism.”

Democratic candidate Joe Biden has been gaining ground in swing states Michigan and Wisconsin, but a large number of ballots remain uncounted.

“The market has been underpricing the chance of a close result,” Seema Shah, Chief Strategist at Principal Global Investors, told the Wall Street Journal. “I’m surprised U.S. equities are doing as well as they are.”