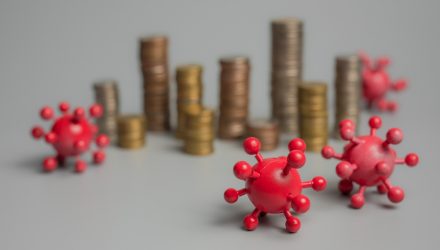 U.S. markets and stock exchange traded funds retreated Monday, with the Dow Jones Industrial Average on pace for its worst session in over seven weeks, as a resurgence in coronavirus cases and no relief package in sight weighed on the economic outlook.

New Covid-19 infections hit record levels in the United States, with El Paso in Texas asking citizens to stay at home for the next two weeks, adding to worries of a second round of broad shutdowns, Reuters reports. In Europe, Italy and Spain also enacted new restrictions to contain a spike in cases.

“People are nervous about the expansion in cases,” Christopher C. Grisanti, chief equity strategist, MAI Capital Management, told Reuters. “The administration has said it does not want to slow down the economy yet as cases rise they may not have a choice.”

Scientists have also warned that cooler weather could lead to a second wave of cases, but it is coming earlier than many had anticipated, the Wall Street Journal reports.

“It’s a worrying picture for sure. You may have to account for the possibility that by midwinter, there might be circuit breakers implemented,” including stringent short-term shutdowns, David Stubbs, head of investment strategy at J.P. Morgan Private Bank, told the WSJ. “But we always knew this recovery would be stop-start: We won’t be truly moving into the main part of a new cycle until the health-care issue itself is dealt with.”

Additionally, there are lower expectations of a fiscal stimulus before the presidential election after U.S. Treasury Secretary Steve Mnuchin highlighted a number of areas in House Speaker Nancy Pelosi’s plan that President Donald Trump cannot accept.

The markets will also be paying attention to the technology sector as it is one of the busiest weeks of the third-quarter earnings season, with results from mega-cap U.S. firms like Apple Inc, Amazon.com Inc, Google-parent Alphabet Inc and Facebook Inc.