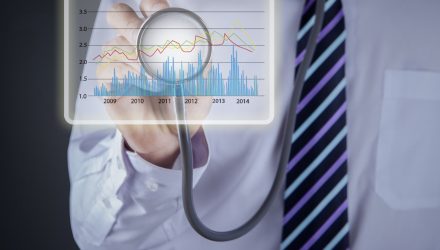 U.S. markets and stock ETFs were mixed Thursday, with the Dow Jones Industrial leading the charge after the Trump administration abandoned a plan to cutback drug rebates.

The decision to withdraw plans to reduce drug rebates helped shares of pharmacy benefit managers rally as the new developments meant these companies would continue to benefit from after market discounts from drugmakers, Reuters reports. On the other hand, drugmakers took the brunt of the hit Thursday.

The stalling progress in Washington indicates that the healthcare industry could face ongoing political uncertainty like legislative risks over the contentious issue.

“We see no solution to the challenges drug manufacturers face regarding growing rebates,” Morgan Stanley analyst David Risinger said in a note.

Nevertheless, U.S. markets still found some support from the dovish comments from Federal Reserve Chairman Jerome Powell, whom stated that the central bank was ready to “act as appropriate” in to bolster U.S. economic growth when needed.

“It seems like they (Fed) are getting closer to a decision point where they are more willing to openly communicate the possibility or the likelihood of a rate cut and the market is just taking that in,” Jason Pride, chief investment officer of private wealth Glenmede, told Reuters.

Many are already taking a more bullish outlook and are positioning on a high likelihood that the Fed could cut interest rates at its upcoming July meeting.

“With the Fed looking almost certain to cut rates in the coming weeks, it is important to position portfolios properly regardless of the outcome,” Mark Haefele, global chief investment officer at UBS Global Wealth Management, said in a note to clients on Thursday, according to the Wall Street Journal.