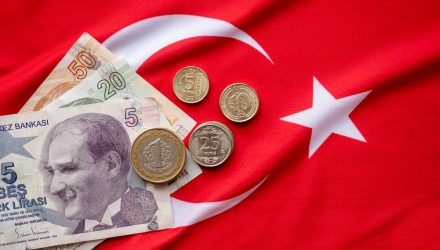 A Turkey-specific exchange traded fund plummeted Monday as the Turkish lira suffered its biggest single-day selloff since 2018 in response to the abrupt termination of the central bank governor last week.

On Monday, the iShares MSCI Turkey ETF (NasdaqGM: TUR) plunged 20.0%, breaking below its long-term support at the 200-day simple moving average, on over 2600x its average daily trading volume.

The sudden selloff was triggered after President Recep Tayyip Erdogan on Friday unexpectedly fired Naci Agbal, the central bank governor who has been hiking up interest rates in a bid to wrangle back rising inflation since his appointment in November, the Wall Street Journal reports.

The sudden ouster has caused foreign investors to grow increasingly concerned that the central bank has lost its independence from political influence.

Money managers are still wary that the new direction might allow the lira to further depreciate as the central bank accepts elevated inflation levels in a bid to lower interest rates.

“We’re really trying to gauge what the level of commitment to the lira is,” Simon Harvey, senior foreign-exchange market analyst at broker Monex Europe, told the WSJ. “We know in Turkey that interest rates are politically sensitive.”

Analysts said Kavcioglu is expected to reverse the aggressive rate rises Agbal had previously adopted in the face of near 16% inflation.

“Erdogan remains a populist authoritarian, whose understanding of macroeconomics is non-existent,” Jan Dehn, London-based head of research at Ashmore Group, told Reuters. “The issue is that these dynamics will hit a population that is suffering with inflation.”