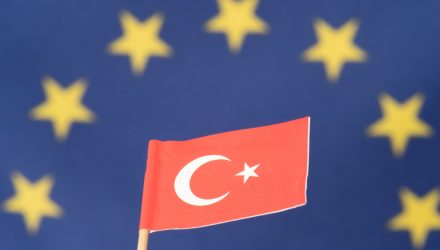 Turkey ETF Strengthens on Renewed Confidence in the Central Bank

A Turkey country-specific exchange traded fund was took charge on Thursday after the Turkish Central Bank bolstered credibility among investors by executing another interest rate hike to combat the runaway inflation.

The central bank pledged in its rates decision to maintain a tight stance until “a permanent fall in inflation,” pointing to risks in the weak lira currency, domestic demand and commodity prices including food costs, Bloomberg reports.

“It was good for the Turkish central bank to provide a slightly stronger push to rates than the consensus was expecting,” Cristian Maggio, head of emerging markets at TD Securities, told Bloomberg. “It shows that the central bank is getting serious about inflation. They are not doing the bare minimum.”

Agbal, who came in just last month, has his hands full with a deteriorating economy, double-digit inflation, a declining lira and depleted foreign-currency reserves after his predecessor implemented rapid credit growth through low interest rates, whom was supported by President Recep Tayyip Erdogan.

The new governor already exhibited a hawkish stance as early as last week when he pledged to rein in the loose monetary policy in response to price developments, he planned to raise the bank’s holdings of foreign reserves without further damaging the lira.

Investors and economists have so far welcomed Agbal’s arrival and his direction in monetary policy.

The latest rate hike will force banks to increase lira deposit rates, which would diminish local investors’ demand for dollars, according to Onur Ilgen, the head of treasury at MUFG Bank Turkey in Istanbul. “The central bank did the right think by getting ahead of market expectations,” he added.