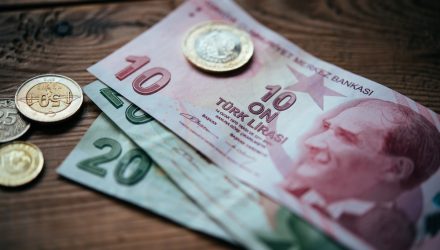 A Turkey country-specific exchange traded fund plunged Monday as the Turkish lira currency hit a record low on growing concerns over geopolitical issues in the region, along with the broader risk-off sentiment due to rising coronavirus cases.

Meanwhile, the Turkish lira broke above the 8 to the U.S. dollar level for the first time ever.

“The collapse in the lira has been expected for a very long-time given poor fundamentals,” Sebastien Galy, macro strategist at Nordea Asset Management, said in a note, according to Reuters. “It is a stark reminder of the great dispersion in performance in emerging markets from China on one side to the default of Zambia or woes of Turkey and South Africa on the other side.”

The lira has continued to weaken through the year due to a combination of rising geopolitical tensions in the Middle East region and heightened concerns over the country’s management of its economy.

In its latest political spate, Erdogan said that French President Emmanuel Macron needed mental treatment in response to his comments about Islam, and senior Turkish officials also censured European leaders, comparing the continent’s treatment of Muslims to the demonization of Jews in the 1920s. In response, Charles Michel, president of the European Council, accused Turkey of resorting to “provocations, unilateral actions in the Mediterranean and now insults”. “It’s unacceptable,” Michel said on Twitter.

Erdogan also challenged the US to follow through with sanction threats on the country in relation to the fighting in the disputed Caucasus region of Nagorno-Karabakh. Ankara has provided weapons and offered backing to the armed forces of Azerbaijan, which has been fighting Armenian soldiers in the region.

“You don’t realise who you are dealing with,” Erdogan warned the US in a speech. “Whatever your sanctions are, don’t be late with them.”

The depreciation in the Turkish lira has fueled the country’s high inflation, which was at an annual rate of 11.75% last month. Additionally, it added to pressure on companies with foreign loans as they try to repay interest on debt denominated in stronger foreign currencies.