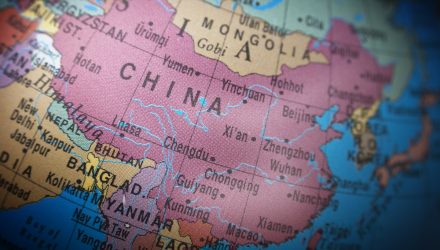 Trade Deal May Not Solve All Emerging Market ETFs’ Problems

The U.S. and China are progressing toward a truce in a prolonged trade war, potentially bringing some stability back to global markets. However, emerging market ETF investors should not count on a trade deal to solve all their problems.

Emerging market ETFs like the iShares Core MSCI Emerging Markets ETF (NYSEArca: IEMG) and Vanguard FTSE Emerging Markets ETF (NYSEArca: VWO) have been among the hardest hit in the wake of the U.S.-China trade war. While they stand to somewhat benefit from the improved stability once a trade deal is in place, the broader developing markets are still reliant on the Chinese economic outlook.

China has been a dominant driver to the problems that the emerging markets are facing. The MSCI EM Index is lagging behind the MSCI World Index by 10 percentage points this year on a total-return basis, the Wall Street Journal reports. Even if the U.S. is removed from the equation, EM stocks are falling well behind those of the world’s other advanced economies for 2019.

Emerging market benchmarks have large exposure to China and its trading partners that rely on Chinese consumption. For instance, the flagship EM index’s direct China weights have increased to almost 32% from 18% a decade ago. South Korea, the second-largest index component, has also been even worse off this year in part due to its exposure to the manufacturing sector of its big neighbor.

Similarly, commodity exporters like Brazil that sell raw materials to Asia are also under pressure. China accounts for over a quarter of the South American country’s outward trade.

On the other hand, if one excludes Asia, there is little difference to the underperformance of EM stocks versus their developed-market counterparts this year.

While a U.S.-China trade deal could lift uncertainty in the global markets, broad emerging market funds will continue to face hurdles given China’s ongoing struggles and slowing growth ahead.