You are at:Home»Equity ETF Channel»This May Be the Start of a Strong Rebound for the Turkey ETF 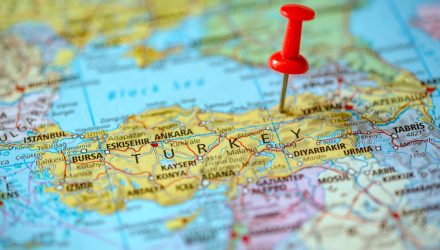 Turkey’s country-specific exchange traded fund has enjoyed a great bump, with Turkish equities coming off their best month of the year, and this emerging market could have more room to run.

The iShares MSCI Turkey ETF (NasdaqGM: TUR) increased nearly 11.0% over the past month, but it is still down 9.3% year-to-date.

After the Turkish central bank ignored President Recep Tayyip Erdogan’s pleas for a July rate cut, the lira currency has bounced back, and investors returned to the emerging market, lifting the Borsa Instanbul 100 Index by almost 5% in August, Bloomberg reports.

Investors may also see Turkey as a value play in the already cheap broader emerging market category. Even after the recent gains in August, the benchmark BIST 100 Index of stocks still trades at a 60% discount to the MSCI Emerging Market Index.

The lira currency remains the worst performer among major EMEA currencies in 2021, as it has depreciated 11% against the U.S. dollar. The currency plunged after Erdogan rolled out his unorthodox theory that lower borrowing costs would slow the pace of inflation and stimulate the economy.

“If and when Turkey has two consecutive months of year-on-year deceleration, then the probability of a near-term rate cut will increase,” according to Gullberg. “Realistically that could happen from November onwards.”

Looking ahead, Coex Partners and Bank’s Julius Baer argued that the rebound is safe for now, as long as there are no further local rate cuts before the end of the year or surprise moves to pull back stimulus in the U.S.

“Policy makers keep telling us they will keep policy where it is until they see significant disinflation,” Coex Partners’ Henrik Gullberg told Bloomberg. “While people don’t necessarily take them at their word, at least it provides some reassurance over the next one to two months.”

Foreign investors funneled a net $453 million into Turkish stocks this month through August 20, according to data from the central bank, marking the biggest inflow in nine months, despite ongoing market anxiety over the Delta coronavirus variant and Federal Reserve tapering plans.