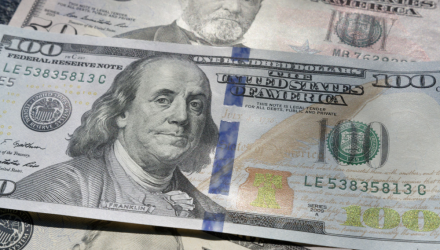 The (Trade-Weighted) U.S. Dollar is Headed to All-Time High

A lot of investors are looking for the U.S. dollar to go down, with the Federal Reserve being more or less on the sidelines, but it just keeps staying very firm and refuses to decline. Most investors look at the U.S. Dollar Index, which frankly is outdated. The U.S. Dollar Index is not trade-weighted and it does not include major emerging markets, where the majority of global growth has happened in the last 20 years.

If one were to look at the Broad U.S. Trade-Weighted Dollar Index, one would see that the dollar is near all-time highs of just under 130 (the latest close, as reported by the St. Louis Fed, is 127.48). If one wanted to use the euro as a proxy of the old U.S. Dollar Index, since it’s the heaviest component (with over 57% weighting), one could say that the dollar today, on a trade-weighted basis, is where the euro was back in 2001, when it hit 83 cents. For comparisons, the euro closed last Friday at $1.13.

This resilience in the dollar has happened as the Federal Reserve is not officially done tightening. The runoff of bonds from its balance sheet continues, even though the Fed Chairman himself has stated that for the time being the fed funds rate hikes are on hold.