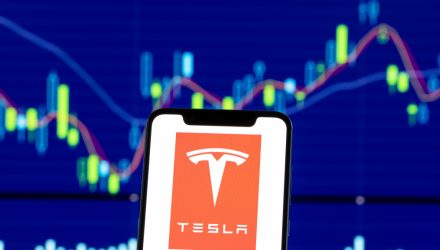 As Tesla (NasdaqGS: TSLA) makes it into the S&P 500 Index, the shift in the electric vehicle maker reveals the importance of how indexing can affect exchange traded fund investors.

For example, the S&P Completion Index tracks, which tracks all U.S. stocks except those in the S&P 500, has outperformed this year largely due to its previous exposure to Tesla, the Wall Street Journal reports.

The electric car maker’s phenomenal 677% return this year propelled the completion index up 31%, or double the gain of the S&P 500 benchmark for the same period. The completion index has held onto Tesla as the company grew to become the biggest index component in the past decade.

However, all of that changed at the end of Friday’s session when Tesla made its move into the S&P 500, which removed the stock from the completion index.

“It was the odd stock out,” Ben Johnson, director of global ETF research at Morningstar Inc. told the WSJ. “It’s a version of the 1990s Chicago Bulls having Michael Jordan sitting on the bench for 40 minutes of a game and has everything to do with the unique way S&P Dow Jones Indices manages that benchmark [the S&P 500].”

Tesla has helped also helped the Vanguard Extended Market ETF (VXF), which tries to reflect the performance of the S&P Completion Index.

The sudden shift of Tesla in index exposure has already affected investors. For instance, Tesla’s stock plunged 6.5% Monday, but VXF gained 0.7%. Additionally, the S&P 500, which now includes Tesla, fell 0.9% Tuesday with the electric carmaker contributing to over a quarter of the loss.

Looking ahead, while VXF may no longer enjoy the fortunes of Tesla, the ETF could dodge the pullback in the electric carmaker, which would now drag down the S&P 500.

“All this goes to show it’s important to understand the nuanced differences in index construction because they can have meaningful impacts on short-term performance, even on indexes that, at first blush, seem to be tracking similar benchmarks,” Johnson added.