You are at:Home»Equity ETF Channel»Targeted ETFs to Consider as Biden Eyes Infrastructure 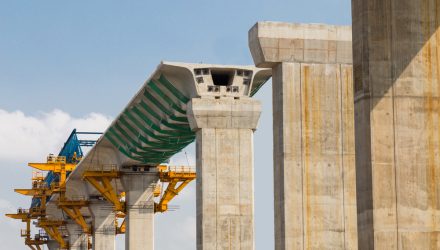 As President Joe Biden looks to update and upgrade the nation’s aging infrastructure, ETF investors can turn to targeted sector plays to capitalize on the spending spree.

Biden is expected to call for a roughly $2 trillion package to invest in roads and bridges, along with plans to fight climate change and boost human services like elder care, Reuters reports.

The potential spending plan, which is expected be announced on Wednesday at an event in Pittsburgh, will be the next partisan hurdle in Congress where members agree that further capital investments are needed to support an economy trying to emerge from the coronavirus pandemic but are divided over the size and inclusion of programs traditionally seen as social services. Paying for the new projects will almost certainly be a contentious issue.

Biden is largely expected to make corporate America foot the bill. He could increase the corporate tax rate to 28% from 21% and fix loopholes in the tax code that allow companies to move profits overseas.

The expected plans include $621 billion to rebuild the country’s infrastructure, including roads, bridges, highways, and ports, along with a $174 billion investment in the electric vehicle market to pave the way toward a nationwide charging network by 2030.

Additionally, Congress will be asked to allocate $400 billion toward expanding affordable homes or community-based care for aging Americans and those suffering from disabilities.

“We’d like to see a plan that goes big,” Representative Pramila Jayapal, a leading Democrat, said on Tuesday. “We really think that there’s ample room to get the overall number up to somewhere in that range in order to really tackle the scale of investments that we need to make.”